Aim is a ‘green’ emissions-free engine which can be used to modify existing diesel locomotives. 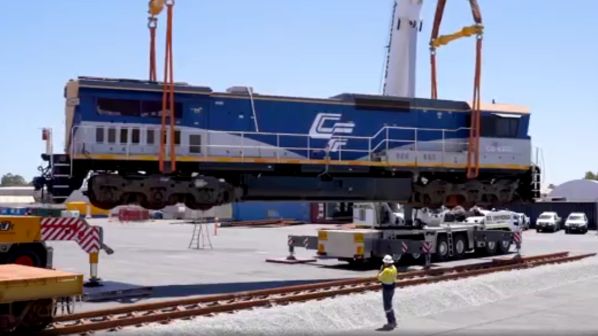 In January Fortescue Future Industries (FFI) took delivery in Australia of diesel locomotives which will be adapted to ammonia-hydrogen power for testing.
Photo Credit: FFI

GERMAN Rail (DB) and Australian energy company Fortescue Future Industries (FFI), a subsidiary of Fortescue Metal Group, are working together to develop an emissions-free ammonia-hydrogen engine as an environmentally friendly alternative to diesel engines for locomotives and rail vehicles.

The ammonia-hydrogen engine is based on an existing diesel engine that will be modified to run on green ammonia and hydrogen produced from renewable energies. The advantage compared with a pure hydrogen engine is that ammonia has a higher energy density than liquid hydrogen and is easier to transport and store.

A so-called “cracker” from the Stuttgart-based company Ammonigy is a key part of the technology of the ammonia-hydrogen engine being trialled by DB and FFI. This splits a small part of the ammonia outside the engine into hydrogen and nitrogen, with the resulting hydrogen then mixed with the remaining ammonia as an ignition gas which ensures CO2-free combustion.

A prototype of the engine is currently being tested on an engine test bench and together with FFI, DB is further developing the technology with methods including endurance tests and emission measurements. Overall both companies say they are investing a mid-six-digit euro sum in the development project.

The co-operation between the two organisations is also focusing on the potential for green supply chains covering production, transport and distribution of hydrogen and ammonia. FFI wants to produce large quantities of hydrogen that can be sold globally in the form of green ammonia with DB potentially a major customer. At the same time, DB Cargo is developing green logistics concepts to bring hydrogen and hydrogen derivatives such as ammonia to the rail industry.

The problem of “strong smell” was raised during the InnoTrans debate as an issue that will need to be overcome.

“We know that leading-edge technology and practical solutions are key to tackling climate change, which is why Fortescue has partnered with DB,” says founder and chairman of FFI, Dr Andrew Forrest. “Together, FFI and DB will work to reduce global emissions as there is an urgent need to find new ways to replace fossil fuels in the transportation industry.”

“We are saying goodbye to diesel and relying on the latest technologies, including the ammonia-hydrogen engine,” says DB Board member for digitisation and technology, Dr Daniela Gerd tom Markotten. “This innovative engine makes it possible to continue operating existing diesel vehicles without producing any emissions… By 2040, DB will be completely climate-neutral.”

"Climate-neutral mobility begins with green supply chains on the rails,” says DB board member for freight transport, Dr Sigrid Nikutta. “We can already transport liquid-bound hydrogen in conventional tank wagons. It's efficient and uncomplicated. Our goal is to develop further logistics solutions for hydrogen, because rail is the most climate-friendly form of transport. One train can replace 52 trucks.”

Earlier this year Arcadis, which has undertaken a study with British clean energy company Small Ports into deploying ammonia to hydrogen cracking technology, urged the Australian federal government to ensure that the design of the Inland Rail project linking Melbourne with Brisbane will be able to utilise hydrogen-powered trains. Ammonia storage facilities were an important consideration needing to be factored in, Arcadis said.