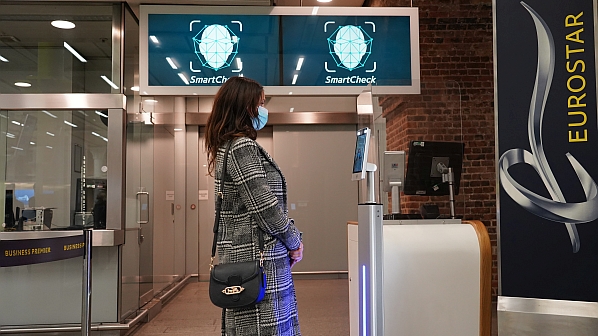 SmartCheck has been developed by iProov and is designed to enable a contactless fast-track service for Business Premier and Carte Blanche passengers undertaking their secure ticket verification and British exit check on their mobile devices prior to boarding.

The concept is being used on rail travel as part of the First of a Kind 2020 competition run by Innovate UK, funded by the British government. Currently the trial is focused on the check-in and exit control processes operated by Eurostar at the London station and not the British or Schengen Entry controls.

A dedicated SmartCheck lane has been created at the British station for passengers using the technology. The Genuine Presence Assurance (Gpa) technology works by completing a brief biometric facial scan to verify that the passenger is the genuine holder of the identity document. This is linked to the passenger’s e-ticket and confirmation is sent to the passenger. The technology can be used on any phone, tablet or computer with a forward-facing camera.

A second face scan is undertaken at the British Exit Check allowing Eurostar to verify that the passenger has completed their passport information, removing the need for passengers to hand over documents.

Eurostar says the overall aim is to eliminate queues and quicken the boarding process, thus improving customer satisfaction, especially for frequent travellers. All personal data is processed in compliance with GDPR law, with full passenger consent, and is deleted within six hours of the passenger travelling.

British secretary of state for transport Mr Grant Shapps called the technology “a window into the future of border control.”

iProov’s global customers include the US department of homeland security, the British home office, the British NHS, the Australian taxation office and the Singapore government.