HACKTRAIN’s third annual hackathon, which seeks to solve issues within the rail industry through innovation, took place from November 4-6 on two separate journeys, one across Britain and another across Europe. 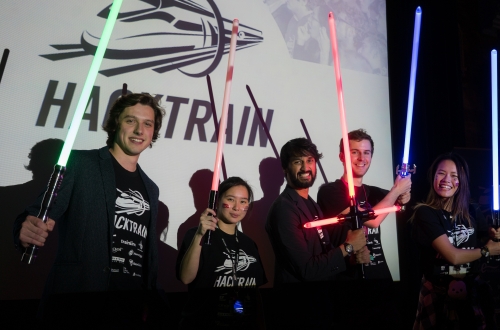 The hackathon initiative is supported by the Department for Transport (DfT) and backed by companies within the industry including: Trainline, Eurostar, Angel Trains, EY, SilverRail, BAI Communications, Transport for London, French National Railways (SNCF), and MTR.

The 80 software developers who attended the event, which began at London’s St. Pancras Renaissance Hotel, were split into two groups, one of which travelled around Britain, and one that travelled on the Eurostar, and they were given various challenges by the companies who supported the event. The aim is to improve customer experience and operational efficiency on the railway.

“This is our third HackTrain hackathon now, and it’s been incredible to see the train operators and the DfT continuing to invest time and resources into making the railway a more pleasant form of travel for all passengers,” says Mr River Tamoor Baig, CEO of HackTrain. “By using data and new technology we can finally work towards solving some of the challenges that have been plaguing passengers and the rail industry for decades, this is our chance for a RailTech revolution.”

HackTrain is aiming to build on their innovation accelerator programme which ran from March - June and resulted in the running of 15 technology trials throughout Europe, across trains, stations, websites and apps.

FlexRail won this year’s hackathon, the team which built a booking system which allows passengers to select a range of times that they are available to travel instead of a fixed time - which current systems provide.

“Instead of buying a ticket at 9am during the busiest train, our engine allows passengers to select a range of times that they’re able to travel, for example 9am - 1pm, and then 24 hours before their travel it notifies them what train they will be on, allowing train operators to distribute the number of passengers evenly across several services, giving passengers a more comfortable experience,” says FlexRail’s co-founder Mr Sina Shamshiri. “The travel engine we built during the weekend would be able to power sites such as Eurostar, Trainline or even National Rail Enquiries.”

When the Hackathon is finished, HackTrain aims to work with some of the 80 participants to help them implement their ideas within the rail market.

“It is critical that we don’t lose these ideas to the lengthy procurement processes or cultural barriers that prevent new technology from reaching the hands of passengers,” says Baig. “In the new year we’ll be working with train operators to take some of these ideas and get them trialled and deployed in a live environment, allowing us to continue improving the passenger experience.”

Two groups chose to use data provided by BAI Communications, telecoms experts, to try and solve challenges in the rail industry. One team thought through how anonymised group Wi-Fi data can help transport planners to identify traffic flows within stations, and present that data with heat maps and dashboards in real-time to operation teams. It used modelling techniques to predict where passengers are likely to go after getting from A to B.

Another team developed a functioning proof-of-concept for a barrier-less ticketing system. The Wi-Fi based system enables passengers to walk straight through a station and directly onto a train without using ticket or smart-card. Their smartphone, connection to a station’s Wi-Fi network, would automatically recognise where they got on and off, creating “live tickets” for each journey. The passenger does not have to do anything, while knowing they were charged the correct fare.

Passengers can then track their journey in real-time, or look over their previous journeys on an application on their phone.

“It is an amazing concept, deployable today, with great benefits for both passengers and transit authorities,” Mr Simon Lopez, commercial manager of BAI Communications told IRJ. “The Hackathon went really well, and it was a privilege mentoring such a diverse group of talented, motivated and solution-focused group of people with a variety of skills.

“All of the teams identified challenges that spoke to them and their experience on the rail network, and within 24 hours of brainstorming, coding, and designing, came up with some really innovative solutions.”