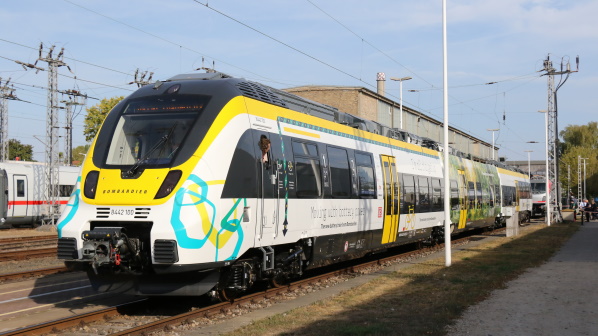 THE German government has announced a €74m, three-year (2021-2024) programme of grants to encourage the adoption of alternative traction sources to replace diesel powered trains.

The grants are designed to cover planning and set-up costs in order to support operators and public authorities to buy or lease ‘innovative low-emission’ trains and provide the required refuelling and charging infrastructure.

Applications for the grants will open in the next few weeks. The grants can cover between 40% and 60% of the additional cost of low-emission rail traction when compared with conventional diesel-powered trains.

The aim of the new funding is to increase the use of low-emission rail traction systems, achieving economies of scale for wider adoption and stimulate demand for manufacturers to further develop the technologies.

The goal is in line with Germany’s Federal Climate Protection Act, which specifies a 42% reduction in transport sector emissions by 2030 compared with 1990, to 95 million tonnes of CO2. The new funding also complements existing federal funding programmes for battery-electric mobility, the federal government's rail electrification programme, and the National Hydrogen and Fuel Cell Technology Innovation Programme.

The concept of BEMUs travelling up to 100km on non-electrified lines between existing electrified routes is already well developed in Germany, with operating contracts awarded in Schleswig-Holstein, and plans for similar arrangements now well advanced in several other states.

Another potential beneficiary is a plan to partially electrify the Berlin/Brandenburg RE 6 Prignitz-Express (Berlin-Spandau -) Hennigsdorf - Wittstock - Wittenberge line. A feasibility study by Potsdam-based consultancy Innoverse on behalf of the Ostprignitz-Ruppin local authority has identified two 10km-long potential electrification islands on the 139km unelectrified section, which could be implemented for around €30m, at a fraction of the minimum €150m cost of full electrification.