HITACHI Rail has signed an agreement with Hyperdrive Innovation, Britain, for the development of battery packs for trains manufactured at its Newton Aycliffe site. 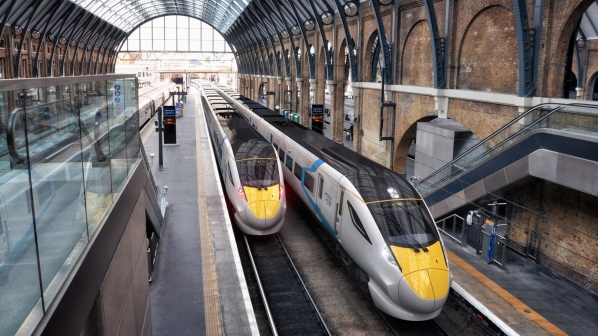 The batteries will be manufactured at Hyperdrive’s HYVE facility in Sunderland, only 32km from Newton Aycliffe. The deal provides Hitachi Rail with a domestic supplier of batteries, lowering production and transport costs.

Early recipients of the batteries would potentially include Hitachi’s existing fleet of 275 trains, with a potential market of up to 400 existing trains. However, the technology is also expected to be installed on new metro and inter-city trains in future.

The agreement is expected to be a boost for Hyperdrive, creating a market for the company to increase production to up to 30,000 units per year, and create double the number of jobs at the Sunderland factory.

It is hoped that the agreement will accelerate mass production of battery trains in Britain, which Hitachi sees as a potentially lucrative market. Currently only 58% of the country’s 32,186km network is electrified, with British trains producing over 2.4 million tonnes of CO2 annually. However, the British government’s plans for a net zero in carbon production by 2050 could see the country’s diesel fleet replaced with new battery trains as an alternative to electrification.

“Battery trains can play a vital role in improving the air we breathe, tackling climate change and providing modern, high performing rail service,” says Mr Andrew Barr, group CEO of Hitachi Rail. “The partnership with Hyperdrive creates a shovel-ready opportunity for new battery trains to be ordered now, as well as cutting carbon and supercharging a green economy for the Northeast and across the UK.”