THE first of two Alstom H3 hybrid locomotives ordered by Audi for shunting operations at its Ingolstadt automotive plant in Bavaria entered service on October 30. 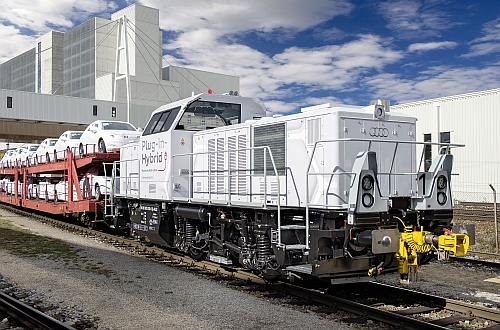 The plant has an 18km internal rail network with around 15 incoming freight trains per day and Audi employs 17 train drivers on the site. Each locomotive carries out around 75 shunting moves per day and operates an average of 3800 hours per year.

The three-axle 100km/h H3 is powered by a 350kW stage IIIB-compatible diesel generator and batteries, and is expected to spend between 50 and 75% of its operational time in battery mode. As a result, the H3 should consume 30-50% less fuel than a conventional diesel shunter and cut pollution emissions by more than 50%. The axles can steer independently to reduce wheel wear in curves.

The second locomotive is due to be delivered next year.

In addition to the locomotives for Audi, three H3s have been purchased by Volkswagen for shunting at its Wolfsburg plant, and Alstom is supplying five H3s to DB for trials in marshalling yards at Würzburg and Nuremberg.