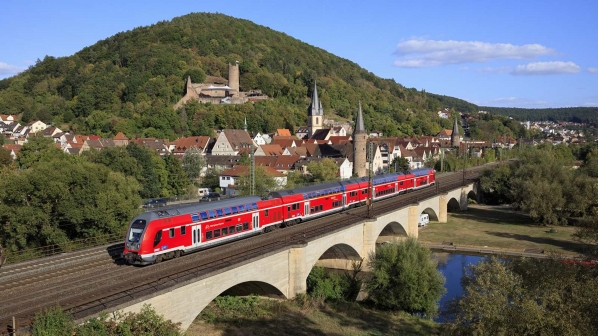 The system has been introduced in the Bavaria, Baden-Württemberg, North Rhine-Westphalia, North and Central regions as well as the Frankfurt, Hamburg, Munich and Stuttgart commuter networks.
Photo Credit: Deutsche Bahn AG/Georg Wagner

iPD enables individual regional and commuter networks to plan and dispatch staff and vehicles through a single system, providing a continuous process chain that ensures all data is readily available.

The system was introduced in the Bavaria, Baden-Württemberg, North Rhine-Westphalia, North and Central regions as well as the Frankfurt, Hamburg, Munich and Stuttgart commuter networks.

Features include automatically mapping all changes to schedules and scheduling cycles in the duty allocation system. Consistency checks alert dispatch managers in the event of conflicts, and IVU.rail also checks whether all legal, collective and technical rules are being observed.

The thermal cameras pick up heat signatures from people entering the tunnel and, using smart algorithms, can determine whether a person, animal or train has been detected. An alarm is then activated, warning a control room operator.

The system has a detection accuracy of 99%, meeting the requirement set out by Infrabel.

Australia: Lithium Australia subsidiary VSPC, Commonwealth Scientific and Industrial Research Organisation (CSIRO), University of Queensland (UQ) and Soluna Australia have been selected by the federal government to take part in a $A 5m ($US 3.2m) programme to develop fastcharge batteries for trams, under the auspices of the federal government’s Cooperative Research Centres Projects (CRC-P).

VSPC will partner with battery researchers at CSIRO’s Clayton site in Victoria to design, manufacture and test fast-charge lithium-ion battery prototypes. VSPC will work with the UQ team on both the characterisation and optimisation of VSPC’s battery materials.

Soluna will advise on manufacturing and will also lead commercialisation of fast-charge battery products.

The carrier, working in cooperation with Tauron, is developing a modernisation programme that will help reduce electricity costs, and at the same time further reduce the negative impact on the environment.

PKP Intercity is considering introducing a number of technologies, including photovoltaic solar panels, indoor and outdoor LED lighting, energy storage and intelligent systems for optimising the consumption and production of electricity.

Germany: S-Bahn Berlin has partnered with command and control solutions developer Synectics to develop an operational management system at its new Security and Service (4S) centre.

The solution is based on Synectics’ Synergy 3 platform, and will integrate and interoperate with all systems, devices, and communications functions managing passenger services, safety, and network security. Existing tools within Synergy 3 and new functionality will facilitate automation of data processing, incident responses, and performance reporting.

The system will allow S-Bahn Berlin staff based at the 4S facility to instantly detect and react to any service or security event.

France: Pandrol has launched a new rail clamp which can be used as a temporary joint prior to welding and to safeguard rail defects prior to repair.

Pandrol says a key fault with current clamps is that as a clamp rotates inward to gain support from the rail, bolt holes become non-concentric causing bolt bends.

The new design guarantees a positive pre-torque angle, so that as the bolt is tightened, the bolt holes remain aligned ensuring the bolts themselves do not bend under self-load. This means they can be reused, leading to cost savings over the lifetime of the clamp.

The clamp has been approved for use on London Underground in Britain, with approval pending from infrastructure manager Network Rail and in SNCF Network, France, Infrabel, Belgium, SBB, Switzerland and New York City Transit in the United States.