Switzerland: Certis Europe has announced it will continue its collaboration with electric weed control developers Zasso Group following successful trials using its Electroherb plant management technology during the past year. 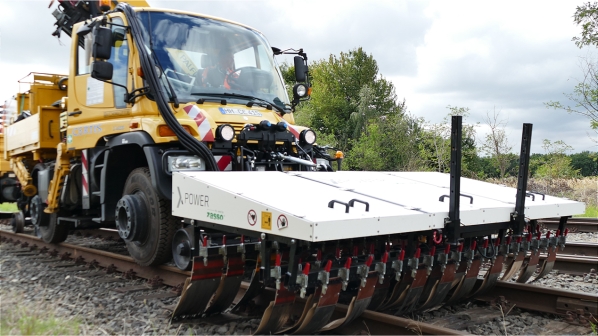 Electroherb plant management technology developed by Certis Europe and Zasso Groupover uses a current of up to 7kV to control weeds.

The Electroherb passes a current of up to 7kV between the front and rear applicator flaps at the front of a machine, targeting vegetation between the tracks. The trial conducted by Certis’ railservices division found that weeds and invasive plants were controlled effectively on test track areas using a modified road-rail vehicle.

Further work will now be undertaken to verify that the system will comply with rail requirements and safety specifications and will not impact adversely on the rail infrastructure in any way.

In order to help support the industry’s efforts to achieve compliance, Hit Rail offers to host and operate the CI software on behalf of railway companies.

Hit Rail is now hosting and operating ProRail’s CI as a Software as a Service (SaaS) through its cloud IT platform. Connectivity with ProRail’s internal systems and railway partners will be established either over Hit Rail’s secure Hermes VPN or the internet.

“We needed to design a tool that would provide practical support for drivers and help smooth out the flow of traffic on the platform,” says Le Boulou terminal site manager, Mr Christian Morin. “With Viia Drive, the drivers optimise their time at the terminal. The Viia teams have all the information they need about the semi-trailers concerned and can provide each driver with the appropriate assistance.”

Available in 10 languages, the app saves time during inspections at the terminal entrance and provides real-time information about the availability of semi-trailers.

Australia: Three companies have been shortlisted to supply customer access technology for the upgrade of 10 stations between Marrickville and Bankstown as part of the Metro Sydney West project.

Singapore: The Land Transport Authority (LTA), together with operators and manufacturers Siemens and Alstom, have set up signalling simulation facilities for the Downtown Line (DTL) and Thomson-East Coast Line (TEL) at Gali Batu Depot and Mandai Depot respectively.

The facilities are equipped with hardware and software similar to the actual signalling systems operating on the city’s lines, which allows software patches to be rigorously tested under a controlled environment and local conditions, before the software is rolled out to the metro line. This increases the robustness of testing and minimises potential disruption to passenger service.

As the facilities replicate the functionality of the metro signalling system, they can also be used as a training tool for LTA and operator’s engineers to gain practical experience on how to efficiently diagnose and rectify system faults during day-to-day operations and maintenance.