The two-car hydrogen-battery multiple has been developed alongside Hitachi and Toyota. 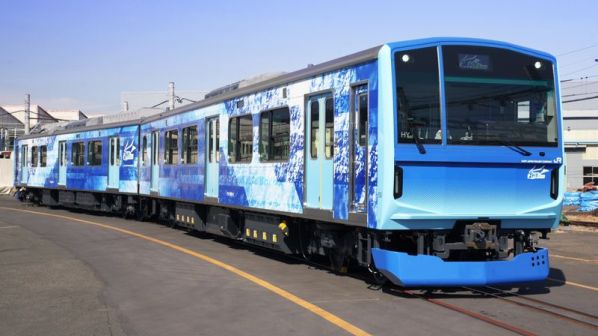 EAST Japan Railway (JR East) is set to commence trials with a hydrogen-battery hybrid two-car Hybari multiple unit on sections of the 45km Tokyo - Kawasaki Nambu and 7km Tsurumi - Ogimachi lines at the end of this month.

JR East has developed the train, the first such vehicle to operate in Japan, alongside Hitachi and Toyota under a Yen 4bn ($US 31.2m) project. Hitachi is developing the hybrid drive system, including power converter and battery storage developed alongside JR East, while Toyota is adapting Mirai fuel cell from electric vehicles and Sora fuel cell for buses for use with the rail vehicle.

Tests will assess the safety and efficiency of operating the multiple unit. The train will operate at up to 100km/h and has a range of 140km per single high-pressure hydrogen load, with the fuel stored in onboard tanks.

JR East is looking at options to replace its 440-strong diesel fleet and has identified hydrogen as an alternative fuel that will require less equipment than electrifying lines, which is potentially beneficial on lines in rural areas. The railway hopes to start commercial deployment in 2024.

However, Mr Shoichi Ozumi, director of the JR East Research Centre, who was quoted by the Nikkei news agency, says the relative cost of hydrogen is still quite high compared with diesel. He says the railway is seeking to collaborate with local authorities to share hydrogen resources with other modes of transport which are also exploring the potential of the technology.