DAC aims to improve the efficiency of freight operations. 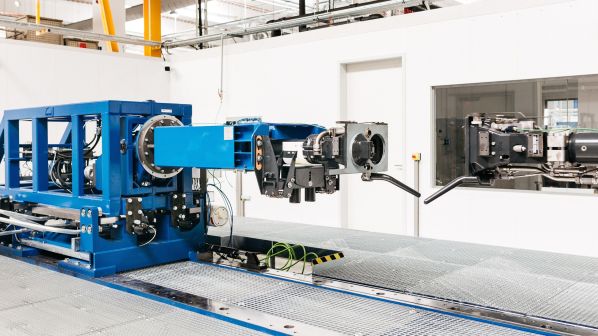 The DAC prototypes are now on test in Budapest, Hungary.
Photo Credit: Knorr-Bremse

THE first prototype Digital Automatic Couplers (DAC) to be assembled by Knorr-Bremse at its main plant in Budapest, Hungary, are now undergoing testing on a new, custom-built test rig at the factory, with a particular focus on coupling and uncoupling operations.

Made of special steel, the DAC can withstand the high torsional and longitudinal forces generated when freight trains are moving, braking or being shunted. Knorr-Bremse says it has also focused on optimising the lifecycle costs of the DAC, ensuring it can be maintained efficiently.

A more advanced version of the Knorr-Bremse DAC is due to be installed on rolling stock later this year for testing under real-world conditions.

The company is aiming to develop a market-ready product by 2025, in collaboration with fellow members of the Europe’s Rail joint undertaking, successor to the European Union’s Shift2Rail research initiative.

In a related project also seeking to make European freight operations more flexible and efficient, Knorr-Bremse is working with German freight operator HVLE to conduct trials of the automated brake testing function of its FreightControl system.

This will require a train to be retrofitted for the wireless transmission of data, which is due to start in 2023 for the train to enter service in 2024.

Knorr-Bremse points out that the brakes on the 500,000 wagons used across the European Union are still manually tested by yard personnel, forming “an exceptionally time-consuming step” in preparing a freight train for departure.

Carrying out brake testing from the driver’s cab using a handheld tablet, for example, would enable freight trains to depart more promptly than at present.

“The key to shifting freight to rail is to digitalise and automate the rail freight sector in Europe, which still largely depends - for the time being, at least - on manual operations,” says Dr Nicolas Lange, chairman of Knorr-Bremse Rail Vehicle Systems.