KOREA Railroad Research Institute (KRRI) has signed an agreement with the province of Gangwon to support the development of hydrogen rail infrastructure in the region. 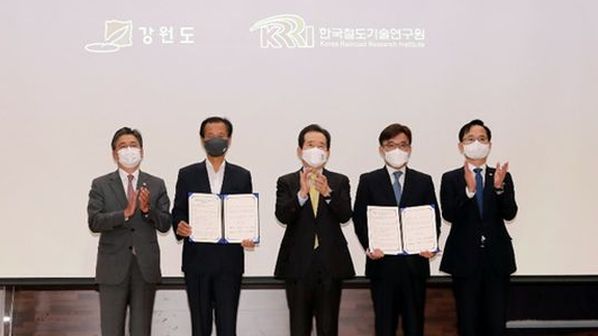 The agreement, signed at Gangwon University’s Green Energy Research Centre on October 10, outlines greater cooperation between the provincial government and KRRI, including for the development of liquid hydrogen-powered trains, hydrogen production and refilling technology.

KRRI says that the intention is to conduct research and development in the region with the eventual goal of creating the technology for high-capacity, long-distance hydrogen-powered rail operation. In particular, the group plans to increase hydrogen storage capacity and reduce logistics costs, and establish a technology development roadmap.

The work will be carried out as part of KRRI’s project to develop a hydrogen train propulsion system that can run up to 600km on a single charge at a maximum speed of 110km/h, which was announced in January 2019. The work is being carried out by a KRRI-led research group of seven organisations, which includes Korea Railroad Corporation (Korail) and Woojin Industrial Systems.

The Won 25bn ($US 21.94m) four-year project, which is scheduled for completion by the end of 2022, is being funded primarily through a Won 22bn grant from the Korean government, with the remaining Won 3bn being provided by private investors.

In addition, the partnership will focus on the development of inter-Korean railway connections. Most notably, this covers the reinstatement of the 110.9km Donghae Bukbu single-track line between Gangneung and Jejin on the North Korean border, which could see the introduction of rail services between South Korea and key Eurasian freight routes such as the Trans-Siberian Railway, via North Korea. This follows the government’s approval of the project on April 23, at the inter-Korean exchange and cooperation pursuit council in Seoul.