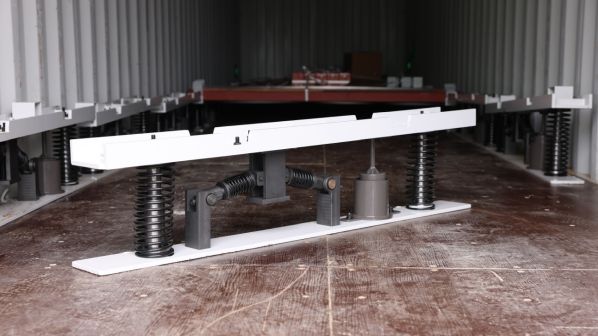 The device is installed in containers to support pallets of high-value goods.
Photo Credit: KRRI

THE Korean Railroad Research Institute (KRRI) has developed what it says is the world’s first device to reduce the shock and vibration that can damage high-value products such semiconductors and electronic goods when they are moved by rail.

The vibration reduction device KRRI has developed for rail features a new combination of coil springs and a damper that absorbs vibration, supports the weight of the freight and reduces shocks.

It can be installed in existing containers without modification, with a row of the devices placed along both sides of the container to support specially-designed freight pallets loaded by forklift.

KRRI says the new device is practical, economical, and easy to install and remove. Its deployment can reduce shock by over 80% and vibration by over 60%.

The vibration reduction device also has environmental benefits, notes KRRI, as it reduces the amount of packaging and plastics required to protect high-value goods in transit.

KRRI says that air suspension systems used in road transport can reduce shock and vibration by 50%, but are unsuitable for use with railway freight bogies due to their low durability and high cost.

Research to develop the device was undertaken by KRRI in conjunction with national operator Korail, Unison Technology and Korea National University of Transportation.

The project was undertaken for the Science and Technology Promotion Agency at the Ministry of Land, Infrastructure and Transport between April 2018 and March 2022, and received Won 4.3bn ($US 3.5m) in government funding and Won 1.4bn from the private sector.

KRRI undertook performance verification through component testing in the laboratory over a period of 12 months, followed by trials in road and rail traffic in the Cheonan - Uiwan - Busan corridor over two years.

These trials confirmed vibration reduction performance in both rail and road use, says KRRI. Durability was tested in various environments ranging in temperature from -60°C to 80°C.

“It was designed and manufactured with economic feasibility as the top priority in order to minimise the increase in logistics costs, and it is a technology that can be applied to various transport environments such as roads, sea and aviation as well as railways,” says Dr Jang Seung-ho, senior researcher at KRRI.