THE Korea Railroad Research Institute (KRRI) has announced that it is currently testing a 5G-based autonomous train control system at its Osong Railway Comprehensive Test Track. 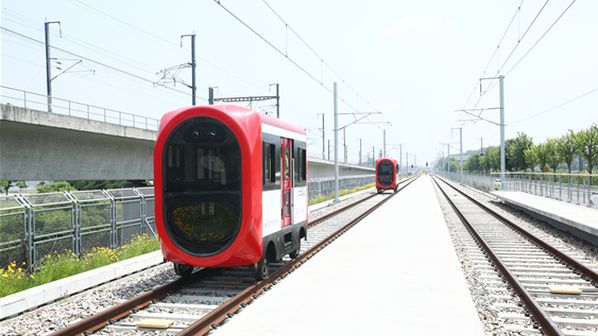 Testing began in April and the system shortens the safe distance between trains by allowing direct communication between vehicles. The technology accounts for both position of the preceding train on the line and variables such as train position, speed and braking distance to allow for automatic adjustment of safety margins.

The system operates according to a distributed control model, through which each train is automatically controlled through direct train-to-train communication and position reporting. Under current control systems, decision-making is carried out through a central control centre and only the train’s current position is considered.

KRRI says that its system could result in significant reductions in the necessary amount of trackside signalling equipment, and increase capacity on lines by up to 30%. In addition, the institute says that the technology could reduce the impact of human error, reduce facility investment costs and improve maintenance work, and that the technology could potentially be used in the future to control switches at junctions.

KRRI says that the use of 5G communications will reduce transmission delay between trains, while increasing both data transmission capacity and reliability by up to 20 times compared with GSM-R.

The testing of two vehicles equipped with the system follows the completion of the test track’s construction in March 2019.

The project was carried out through a public-private partnership (PPP) agreement with SK Telecom, signed in January of this year.

“This technology can reduce congestion during commuting hours and enable trains to operate more efficiently,” says Mr Na Hee-seung, president of KRRI. “In the future, rail will be able to harness smart innovation for convenient transport, through the convergence of green and digital initiatives.”

“We will carry out additional tests such as rerouting technology for trains, and implement train separation and joining technology, as well as advanced control of train spacing and the train-to-track control and communications systems,” says KRRI team leader Mr Jeong Rak-gyo.

The tests are part of a Won 22.1bn ($US 28.76m) autonomous train development programme backed by the Korean National Science and Technology Research Council of the Ministry of Science & ICT. The project will run for nine years between 2016 and 2024.