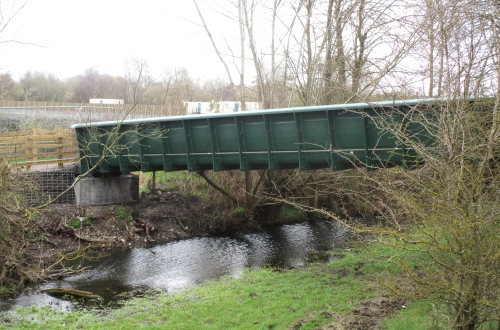 The bridge was completed in March by Mabey and its partner Arup, but Railtex was the first time that the bridge was on show for potential buyers. It is designed to be assembled in hard-to-reach sites where large cranes or heavy machinery cannot be used.

Partly funded by the Rail Safety and Standards Board (RSSB), the modular footbridge aims to provide a safer alternative to level crossings where traditional pedestrian bridges cannot be installed.

The first bridge has been installed in Oxford for Network Rail. The modules were transported by an articulated lorry before being assembled on site and lifted from a distance.

Based on Arup’s concept, Mabey has launched the footbridge to potential suitors under the brand name Pedesta. Pedesta is pre-engineered, customisable in its form, material colour and finish, and also includes identical 1m modules, which are fixed together with bolted shear connectors before being post-tensioned. It can span up to 30m, and is 70% lighter than steel.

The material provides resistance to fire, graffiti, vandalism, and ultraviolet radiation. It is also possible for advertising to be installed on the bridge.