The solution could save £100m as part of NR’s electrification programme. 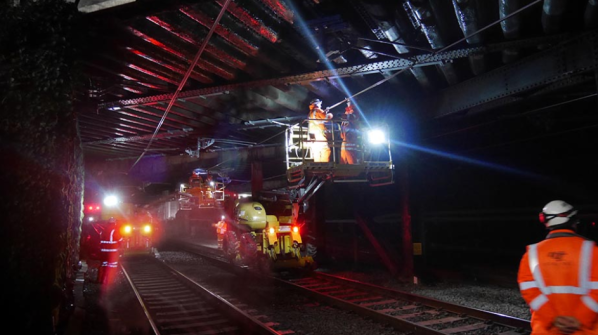 The solution, which employs a combination of electric-resistant paint developed by NR in partnership with the University of Southampton, and voltage-controlled clearance (VCC) equipment, enables the electrical clearance gap to be reduced by 20mm from the overhead line equipment (OLE) to the bridge, and 70mm from the OLE to train roofs.

NR says that it has collected a year of data from the trial use of the solution on Cardiff’s 19th century Intersection Bridge. It is now developing the solution further, and investigating the potential for nationwide deployment on a range of bridges.

The solution was employed on the bridge as part of the electrification of the London Paddington - Cardiff Central main line, which was completed in mid-2020.

NR says that the solution avoided having to demolish and replace the bridge, saving an estimated £40m of taxpayer money and avoiding potentially weeks of delays to services.

The announcement follows the release by NR of an interim business case for its Traction Decarbonisation Network Strategy (TDNS) in September 2020, which recommended the implementation of a rolling electrification programme on up to 13,000 track-km.

“Typically, a third of electrification project expenditure is on reconstruction and modifying of civils structures - tunnels, bridges and stations - to allow the installation OLE with the necessary clearances,” Stainton says.

“This solution will allow future electrification projects to be installed and energised without multi-million-pound expenditure, potentially saving the taxpayer as much as £100m. It will also significantly reduce the number of rail closures, reducing the disruption to passengers, road networks, and railway neighbours.”