IRJ lifts the lid on the retro-fitted hydrogen-electric class 319 multiple unit, which is operating from Glasgow Central station throughout COP26. 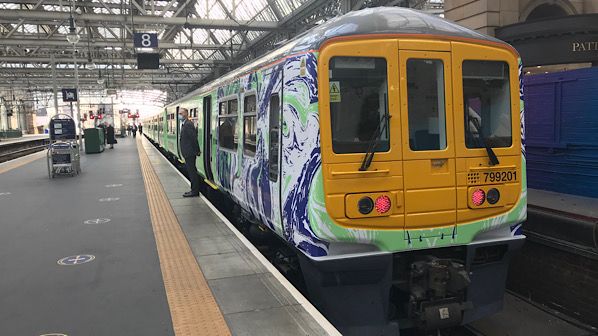 The HydroFlex Demonstrator has operated from Glasgow Central throughout COP26.

DELEGATES at the COP26 global climate summit in Glasgow have had the opportunity to take a trip on the Hydroflex four-car hydrogen-electric multiple unit that has been developed into a demonstrator vehicle by Porterbrook in just 10 months.

As well as hydrogen fuel cells, the retrofitted class 319 unit, now reclassified as class 799, is equipped with a pantograph to support electric operation. Trips are taking place in electric mode on the Cathcart Circuit from Glasgow Central with the unit’s “hydro chamber” left open so delegates can see up close the hydrogen-based technology that when active can power the train at up to 160km/h and offers a range of around 480km.

A tour of the train was provided to IRJ at Glasgow Central station on November 9 by Mr Spencer Jones, Porterbrook’s HydroFlex project manager, who oversaw the build of the hydro chamber at the Long Marston Rail Innovation Centre.

The hydro chamber has been installed in a dedicated part of a single unit of the train and is insulated to maintain a stable temperature. Three banks of 12 hydrogen fuel cell tanks for a total of 36 150kg tanks, with total capacity for 277kg of green hydrogen sustainably sourced through green energy, are neatly positioned in a row on one side of the car. The aluminium tanks have been supplied and commissioned by Luxfer Gas Cylinders, a subsidiary of Luxfer Canada, and each is coated in Kevlar with one end fixed into position and the other allowed to “float” to maintain the system’s flexibility.

Hydrogen is stored in the tanks at 350 bar, which is regulated to meet the fuel cell at 16 bar. Each of the four fuel cells has an output of 125kW, and as is the case in other hydrogen trains, a process of electrolysis combines the hydrogen with oxygen taken from the air to produce electricity in the fuel cells. Water is a by-product of this process and is released through a pipe from the bottom of the train. The fuel cells are located in the adjacent section of the hydro chamber and charge a 240kW lithium-ion battery which provides all power for the train, including the 750V dc traction motors with two fitted to each powered bogie, as well as auxiliary power. A specially developed control system ensures the right amount of power is released at the right time depending on the requirements of the train.

Two hydrogen refuelling points are situated on either side of the train, matching the set up on a conventional DMU. A mobile hydrogen refuelling unit has been utilised for the Hydroflex with various nozzles designs available depending on the speed of the refuelling process. The train is also compatible with a future stationary refuelling unit at a depot. The hydro chamber is equipped with heat and hydrogen sensors, which in the event of an emergency or if gaseous hydrogen is detected, is able to prompt the safe release of the hydrogen gas from the train and into the atmosphere via vent lines or scavenge fans which pull the air through. A solenoid system is also in place to close off the tanks to prevent any further gas seepage.

Work to equip the train with hydrogen fuel cells and associated equipment to support operation took around three months. The remaining time was taken up by securing the necessary regulatory and safety approvals, which was completed in time to demonstrate the vehicle in Glasgow.

A team of 16 from Chrysalis Rail supported Porterbrook with the work at Long Marston. Installing the hydrogen tanks required the development of a bespoke crane for the process of lifting and positioning the tanks in the car. The 48-tonne overall weight of the hydrogen train is comparable to the loaded weight of a fully occupied DMU and complies with RA4 standards.

Ms Helen Simpson, Porterbrook’s innovation and project’s director, says further trials with the train will commence immediately after COP and the goal for the project is to secure a trial with a mainline operator. “I really hope that we are able to take this to different parts of the country so we can demonstrate the potential that hydrogen and HydroFlex has to as many people as possible,” Simpson says.

The hydrogen train project originated as a research project at the University of Birmingham, which under a partnership formed with Porterbrook in September 2018 developed the first-generation prototype HydroFlex vehicle. This was unveiled at the Rail Live event in June 2019. Mainline demonstrations with this vehicle took place in September 2020.

Simpson says collaboration was key to successful delivery of the subsequent demonstrator project. She says the company’s engineers were accessing “any publicly available” research and literature on the topic to inform development. One of the key partnerships was with the Railway Safety and Standards Board (RSSB) to incorporate findings from their research into hydrogen fuel cell technology as well as the safety of using hydrogen as a fuel for transport. Porterbrook also worked in partnership with infrastructure manager Network Rail as it navigated the approvals process. Simpson says this was a particularly challenging element as the project was effectively setting the benchmark for hydrogen operation in Britain. “Nothing like this had been done before,” she says.

Simpson says unlike the prototype, the demonstrator is designed to show that the train can conceivably accommodate passengers and be used in commercial operation. The three passenger vehicles are equipped with seats as well as two large meeting tables to host discussions during the conference. This is an objective shared by Ms Mary Grant, Porterbrook CEO, who was also in Glasgow and spoke enthusiastically about the project. “Electric supply has its limitations so we must be looking at other things,” Grant told IRJ. “There are prospective customers in the north east of England interested in this type of train. It is important for us to show that the technology is viable. To have done this in 10 months is a great achievement.”