Knorr-Bremse says 40% increase is possible with ETCS and ATO. 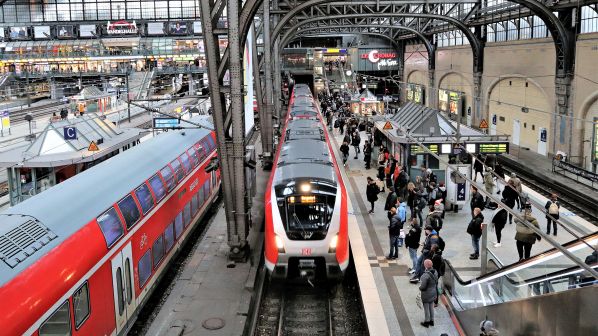 BRAKING technology that would allow trains to stop within a consistent distance has the potential to increase capacity on commuter networks by 10% without the need for new infrastructure, Knorr-Bremse says.

Knorr-Bremse says RBD has “considerable potential,” which has been demonstrated by means of a study conducted with Nextrail and Via-Con, based on operational simulations of introducing ETCS and ATO to the Hamburg S-Bahn network operated by German Rail (DB).

The study found that on dry rails, RBD could reduce headways and increase capacity by 10%. When combined with ETCS und ATO, the overall potential capacity enhancement is 40%.

In adverse weather conditions when rails are wet and train wheels more likely to slip and slide when braking, simulations demonstrated that RBD could deliver significant improvements in punctuality, cutting delays by up to 57%.

Further studies would be required to fully determine the potential for RBD to increase the capacity of commuter and main line operations, and Knorr-Bremse says that migration to the new system would require close coordination between system suppliers, train manufacturers, regulatory agencies and operators.

Knorr-Bremse has already started installing smart sanding systems in rolling stock, and says that its combined deceleration control and adaptive wheelslide protection system should be ready for series production in 2023.

“The technology enables trains to brake more precisely, even in bad weather,” says Mr Matthäus Englbrecht, vice president, global brake systems, at Knorr-Bremse Rail Vehicle Systems. “This means that RBD-equipped trains could run just as safely at more frequent intervals, while at the same time reducing delays and achieving the punctuality which passengers rely on.”