AN onboard optical-fibre track monitoring system developed by the Hong Kong Polytechnic University (PolyU) is being installed on the two original lines of the Singapore metro. 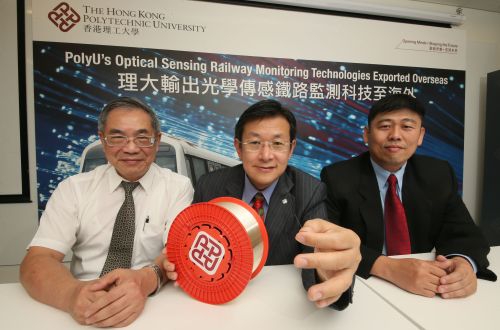 PolyU claims its system is the first in the world to use revenue-earning rolling stock equipped with fibre optic sensors to monitor the tracks continuously. PolyU says this should enable defects to be identified rapidly so that they can be rectified as quickly as possible thereby improving reliability.

The sensors can also be installed on the track to monitor trains allowing faults to be detected quickly.

SMRT in Singapore signed an agreement with PolyU in February and testing of the system was completed in June. Six groups of sensors are now being installed in tracks and trains of the East West Line and North South Line, which are the two busiest metro lines in Singapore. The work will be completed in early 2017.

PolyU will train SMRT staff to operate the system, while the data collected during monitoring can be sent to PolyU in real-time for analysis when needed. In addition, PolyU will provide maintenance and technical support to SMRT for a period of five years after the system has been commissioned.