THE technical supervisory authority in the German state of Hessen has approved a new tram collision avoidance system with automatic emergency braking developed by Bosch Engineering, clearing the way for trials on the tram network in Frankfurt-am-Main. 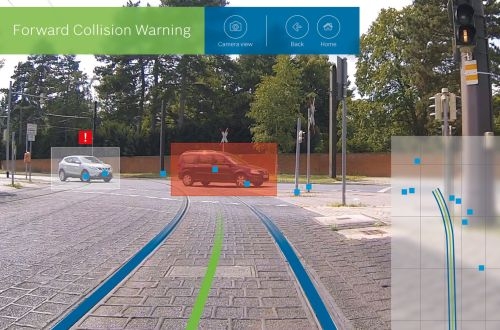 Based on technology developed by Bosch for the automotive industry, the system warns the driver of an impending collision and applies the brakes independently if the driver's reaction is too slow to avoid an accident.

Bosch launched its first tram driver advisory system in 2014, but the latest version is the first to offer an automatic braking function. The manufacturer says the technology could ultimately provide a basis for the full automation of light rail vehicles.

The system comprises three pieces of hardware: a video sensor, radar sensor, and a rail control unit. With an aperture of up to 70o, the radar sensor can monitor up to 160m of track ahead of the tram, measuring the speed and distance of any road vehicles or other trams. The sensor can also detect static objects such as buffer stops.

The video sensor works with the radar sensor to provide accurate and rapid monitoring of the line ahead. Data from both sensors is processed by the control unit, which also takes into account other factors such as the speed of the vehicle to provide a detailed image of the environment.

If the system detects an object endangering the tram, the driver receives a visual and acoustic warning in the cab. If the driver fails to react within two seconds, the system automatically makes an emergency brake application. However, the system will still enable the driver to deactivate the brake or increase braking power at any time.