British company says the cost of battery trains is almost half that of diesel or hydrogen trains. 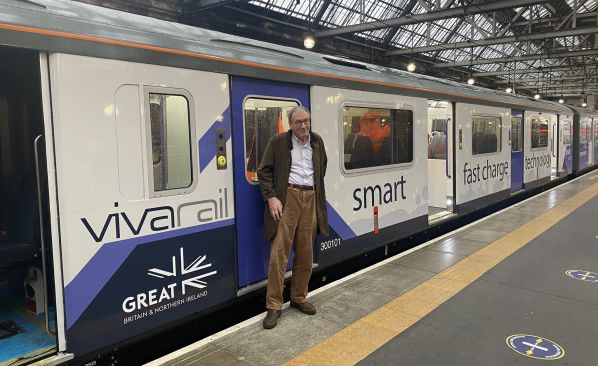 VIVARAIL, Britain, says its battery-powered trains offer a cheaper option to other alternative power as it demonstrates the smart technology to people from around the world at COP26 which opened in Glasgow on October 31.

On October 29, a demonstration trip for invited guests operated on the 11.8km Glasgow Central - Barrhead line, during which Vivarail design director, Mr Neil Bates, explained that using assumptions for a two-car train operating on a 160km line, battery technology will cost £1.37 per kilometre compared with £2.49 for diesel and £2.58 for fuel cell hydrogen.

The three-car former London Underground class 230 D-Train used to demonstrate battery power in Scotland is fitted with six batteries, with three fitted to each driving car. During operation four batteries are in use with two as resilience. Should two batteries fail, the train can still reach its destination Vivarail chair, Mr Adrian Shooter explained, saying that the train could also keep to its planned timings.

The battery train is limited to 96km/h. However, Bates explained that studies have been conducted in comparison with DMUs operating at a 120km/h maximum speed on journeys of around one hour, which showed that due to the better performance of the battery train when accelerating combined with the fact the train has four doors per coach meaning boarding and alighting is quicker, the battery train can complete the journey around five or six minutes faster than the DMU.

When in traffic, the train would be fully charged at the start of the day’s operation and would be recharged through the day using Vivarail’s Fast Charge system which can fully recharge the train in 10 minutes. This does, however, require approval from British infrastructure manager Network Rail (NR). While supporting the introduction of the technology, NR wants it to be assessed for a minimum of one year and has stipulated that it must be compatible with all manufacturers’ technology and not just Vivarail’s.

Future of the trains

Shooter explained that the Fast Charge technology is transferable to other manufacturers. He said discussions have taken place with operators of EMUs that would see them fitted with batteries supported by the Fast Charge technology which would enable them to operate on non-electrified lines. Negotiations are also underway regarding fitting the technology to locomotives for shunting operations. The technology can be supplied to manufacturers for brand new trains as well. “We’re not just a rolling stock supplier,” Shooter said.

Bates also said that because of the situation in Britain regarding the reforms recommended in the recent Williams-Shapps review, Vivarail was taking the opportunity to support the Pop-Up Metro concept in the United States where Railroad Development Corporation (which is a shareholder in Vivarail) plans to use class 230 trains to help restart urban passenger services in a cost-effective way. Bates confirmed to IRJ that a second train was currently being prepared for export, and that it could soon be in use in the northeast of the US.

There is huge potential for battery trains says Mr Martin Frobisher, NR group safety and engineering director who was speaking via Zoom onboard the battery train.

“This is not some theoretical prototype in a laboratory,” he said. “This is a real train that you're travelling on right now.” He suggested branch lines would be far better served by battery trains instead of investing huge sums in electrification. Frobisher also suggested that battery technology could offer a last-mile solution for freight trains in terminals and would reduce the cost of electrification by offering the opportunity to introduce partial electrification on certain routes, helping to avoid expensive demolition or modification of structures.