Supplier says the 4.9G/LTE telecoms network installed on the new Delhi – Meerut line is the first of its kind to support ETCS Level 2. DB also agrees O&M contract for the new railway. 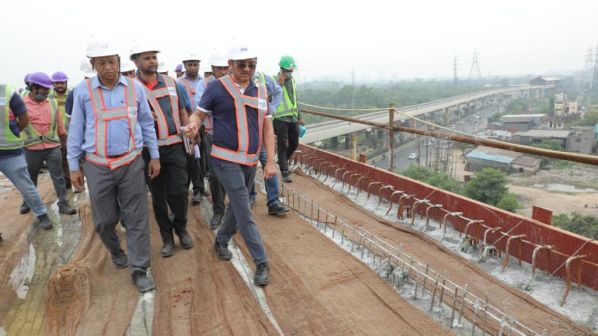 TESTING has been completed of the telecoms system for the first 82km Delhi - Meerut phase of the Rapid Rail Transport System (RRTS). Nokia says the 4.9G/LTE private wireless network is the world’s first telecoms network to support ETCS Level 2 signalling, which Alstom is installing on the new standard-gauge railway.

Voice and data calls have been successfully completed over the network, according to Nokia, which is supplying its Nokia Evolved Packet Core (EPC), Compact Mobile Unit (CMU), NetAct, and Network Services Platform (NSP) as well as carrying out installation and commissioning, and integration services. Nokia will also deliver Operation Control Center (OCC) and Back-up Control Center (BCC).

Alstom is supplying its Atlas ETCS Hybrid Level 3 solution for the line, which the supplier says is a combination of ETCS Level 2 and the shorter virtual sections usually deployed in ETCS Level 3, which improves the level of performance. In addition, Alstom is supplying digital interlockings and Automatic Train Operation (ATO) over the LTE network, which will also control platform screen doors. The ATO element enables trains to use radio signals to continuously receive their movement authorities and to report their exact direction and position.

Alstom was awarded the €106m signalling contract in January 2020 and the partners confirmed the telecoms element in January. The Delhi - Meerut line, which includes 25 stations, is due to be completed in 2025. Alstom is also supplying a fleet of 30 six-car inter-city trains for Delhi - Meerut services and 10 three-car trains for Meerut local services.

The Delhi - Meerut line is the first stage of a network of 160km/h standard gauge railways linking Delhi with neighbouring cities across the National Capital Region (NCR). The use of ETCS will facilitate interoperability across the entire network as it is constructed.

Meanwhile, the National Capital Regional Transport Corporation (NCRTC), a joint venture of the Indian government and the states of Delhi, Haryana, Rajasthan and Uttar Pradesh, which is implementing Regional Rapid Transit System (RRTS) across the NCR, agreed a 12-year operation and maintenance contract with DB India for the Delhi - Meerut corridor on July 1.

“RRTS is a capital-intensive project, where long-term sustainability is paramount without compromising the safety and comfort of commuters,” says Mr Vinay Kumar Singh, managing director of NCRTC, who was speaking at the signing ceremony.

“I am certain that, using the expertise and experience of our O&M partner combined with advanced technology adopted by NCRTC will bring in the predictability of long-term costs, managerial efficiencies, and entrepreneurial spirit of the private sector in providing quality services to the commuters. I truly believe that this pioneering initiative by NCRTC will lead to a paradigm shift in the entire sector and will make the sector cost effective and competitive.”

The January 2022 edition of IRJ includes an interview with Singh. Digital subscribers can read the article here.