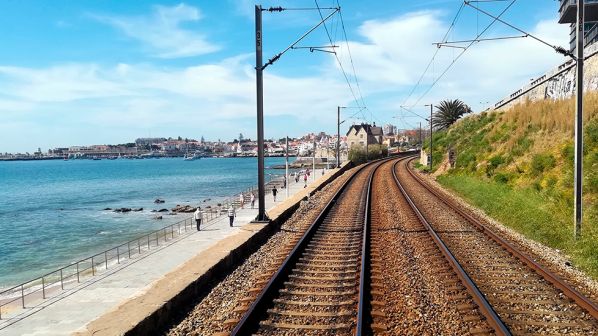 INFRASTRUCTURE Portugal (IP) has announced that it is starting a project to modernise the track and catenary of the Cascais Line, which links Lisbon with Oeiras and Cascais.

A contract worth €31.6m has been awarded to the Fergrupo consortium of Construções Técnicas Ferroviárias (CTF) and Comsa. The contract includes changing the overhead electrification system from 1.5kV dc to 25V ac along with full replacement of the existing catenary between Cais do Sodré station in Lisbon and Cascais.

The project is being carried out under the scope of the Cascais Line Modernisation programme which is being co-financed by the Operational Programme for Sustainability and Efficiency in the Use of Resources (Poseur) within the Portugal 2020 partnership agreement between the government and the European Commission to achieve smart, sustainable and inclusive economic growth.

The Cascais Line Modernisation programme aims to provide more efficient and environmentally sustainable rail services on the route.  As well as modernisation of the track and catenary, the contract includes track remodelling at Algés, Oeiras, Carcavelos, São Pedro and Cascais stations, installation of a new eastern connection to the Carcavelos stabling sidings and installation of passing loops in the middle of the existing tracks at Santos, Belém and Santo Amaro.

Also currently in progress is construction of a new c traction substation at Sete Rios, and resignalling with ETCS Level 2. IP awarded a contract to Thales for reignalling the Cascais Line in October 2021 (LINK to IRJ October 19, 2021 story).

In addition, tenders are in preparation for upgrading stations and level crossings on the route.

The modernisation of the line, combined with the acquisition of new trains for Portuguese Railways (CP) suburban services, are seen as important to improving the public transport offering and serving the growing population of the Lisbon area. In addition to commuter traffic, the Cascais Line also carries large numbers of tourists.