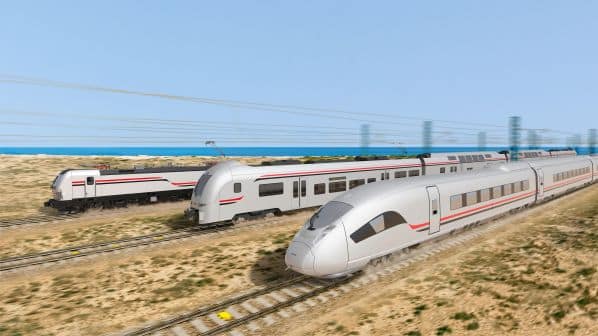 THE Egyptian government has awarded a contract to German Rail (DB) to operate the country’s future high-speed network.

The contract was signed at the UN COP27 climate conference in Sharm-el-Sheikh between the government of Egypt, the host country, and DB subsidiary DB International Operations (DB IO). The contract, which will initially run for 15 years, is valued in the single-digit billion euro range, according to DB.

DB IO’s contract includes management of infrastructure and rolling stock for high-speed and regional passenger services and freight, as well as maintenance of stations and depots in joint venture with the Egyptian company Elsewedy Electric (EE).

In August Egypt’s Ministry of Transport signed a contract with a joint venture of DB subsidiary DB Engineering & Consulting and EE to oversee operation of the planned high-speed network.

Egypt is planning to build a 2000km high-speed network which, once completed, it is claimed will be the sixth largest in the world. The National Authority for Tunnels (NAT) signed a contract with Siemens Mobility, Orascom Construction and The Arab Contractors in May for construction of the new network.

Three lines are envisaged, with 60 stations giving access to rail transport to an estimated 90% of the population of Egypt. Siemens Mobility will supply ETCS Level 2 and electrical power supply systems on all three lines.

Siemens is also to supply 41 Velaro eight-car high-speed trains, 94 Desiro high-capacity four-car regional EMUs and 41 Vectron freight locomotives, all of which will be operated in Egypt by DB IO.

It is planned that initial services will start on Line 1 in the north of the country in 2025. This route, dubbed the “Suez Canal on rails,” will connect Alexandria, Cairo and the New Administrative Capital (NAC) currently under construction near Cairo.

This first line, officially called the Green Line, will be extended from Alexandria via El Alamein to Mersa Matruh on the Mediterranean coast in the northwest, and from NAC to Aln Sukhna on the Gulf of Suez in the east.

Future lines to be built are Line 2, or the Blue Line, from October Gardens in Cairo via Qena, Luxor and Aswan to Abu Simbel in the far south of the country, and Line 3, or the Red Line, from Luxor via Qena and Hurghada to Safaga on the Red Sea in the southeast.

Egypt’s population is forecast to increase from the current 105 million to 160 million by 2050, and the new high-speed network is intended to combat road congestion and pollution and to help meet the sustainability targets being promoted by Egypt at the COP27 conference.

DB says that the German railway network will also draw benefits from the Egyptian “mega project,” which is the third major international transport project for DB IO in 2022 after receiving contracts for projects in Canada and India. It says that technology skills and knowledge gained from working with Siemens in Egypt will help inform projects at home in Germany, as well as profits gained from the Egyptian operations being invested in Germany.