Afghanistan: The Afghan Railway Authority received an experimental train from Iran on October 28, for use on the planned 218km railway between Herat, Afghanistan, and Khaf, Iran. 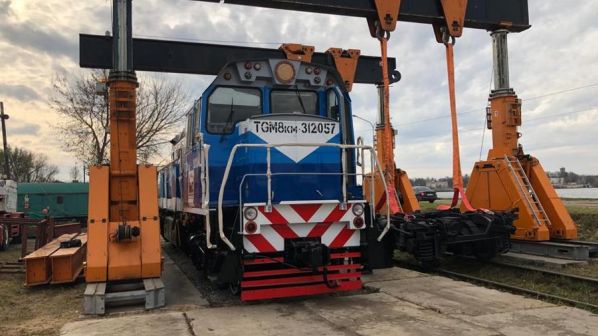 STM is in the process of delivering a total of 75 locomotives to Cuba.
Photo Credit: Sinara Transport Machines

The delivery comes in advance of the inauguration of the third phase of the project later this month, which runs between Sham Tegh, Iran, and the village of Rawzanak, Afghanistan.

Cuba: Sinara Transport Machines (STM) has delivered seven TGM8KM diesel shunting locomotives produced at Lyudinovo Plant to the Union of Cuban Railways (SZHDK). The delivery is part of an order for 75 units, of which a total of 53 are now in operation in the country. Under the contract, STM will also supply around 10,000 spare parts and modernise the Sienaga maintenance depot in Havana with compatible equipment for the new fleet.

Russia: The Russian government has outlined plans to create a prototype hydrogen-powered locomotive by 2024 in its ‘Development of hydrogen energy in the Russian Federation 2024’ action plan, which was approved on October 12.

Poland: Rolling stock leaser Eurowagon has begun operation of its initial batch of 66 Sggrs 24m-long wagons, out of an order of 266, which were delivered by manufacturer Tatravagónka over the summer. The order, for a total of 377 units, also covers 51 type T3000e pocket wagons, which are currently being delivered, and 60 Class Sgmmrss 27m-long wagons, due in early 2021.

Italy: South Eastern Railway (FSE) has received delivery of two Impuls 2 EMUs from Newag as part of an order for additional six vehicles made in May 2019. The order was placed under a framework agreement signed in December 2015 for up to 15 three-car trains.

Britain: Infrastructure manager Network Rail (NR) has signed a leasing agreement with Swiss rolling stock leaser Wascosa for a total of 570 freight wagons, to be built by Greenbrier Europe and serviced under the 10-year contract in partnership with British freight operator GB Railfreight.

Poland: A pair of Impuls 2 EMUs ordered by the Polish province of Podkarpackie have begun testing in preparation to begin operation on the region’s network. The trains were ordered under a Zlotys 200m ($US 51.56m) contract signed on July 31 2019 for 10 vehicles, eight electric and two diesel, equipped with ETCS Baseline 3 signalling.

Russia: Samara Metro has signed a contract with Transmashholding (TMH) for the overhaul and refurbishment of six 81-714/717 class metro cars, which will be carried out by the Metrowagonmash branch in St. Petersburg. The cars will be put back into operation on the metro by the end of December. The overhaul is expected to extend the service life of the cars by around 15 years.