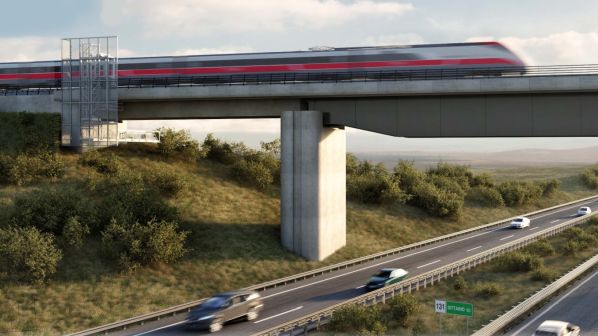 An image showing how one of the five new viaducts on the Nuova Enna - Dittaino section of the Palermo - Catania line will look when operational.
Photo Credit: Webuild

ITALY’s infrastructure manager Italian Rail Network (RFI) has awarded a €616m contract to Webuild and its consortium partner Pizzarotti to build a 15km section of the Palermo - Catania railway in Sicily.

The contract covers the design and construction of the Nuova Enna - Dittaino section, known as Lot 4b. Webuild is consortium leader with a 70% stake and Pizzarotti has the remaining 30%.

The new section, which will run in three tunnels totalling 8.5km of the route, and on five viaducts making up another 2km, has the aim of increasing line speeds and improving performance.

The project will involve the construction of a new station at Enna and the modernisation of another at Dittaino. Webuild says that quality of design and employment of sustainable solutions to minimise the impact of construction on the surrounding area are key features of the scheme. Circular economy principles are to be adopted, such as reuse of 99% of all the earth excavated, recovery and reuse of rain and industrial water, efficient energy consumption and use of solar panels.

The contract will be financed from Italy’s National Plan for Recovery and Resilience (PNRR) and construction will start after design work is carried out which is expected to start before the year-end. The construction of Lot 4b is expected to create 650 jobs, directly and indirectly, and to involve a supply chain of 100 companies.

The Palermo - Catania line is part of the European Union TEN-T network that Webuild, an Italian construction and civil engineering group previously known as Salini Impregilo, is also involved in on the Catenanuova - Bicocca section of the same line.

That contract, which began in 2019, involves doubling the 38km section so that line speed can increase from 90km/h to 200km/h, along with work on the line superstructure, signalling and telecommunications systems and the electrical substations for powering trains. Bicocca station is to be redeveloped and a new one built at Motta Sant'Anastasia, and new viaducts built over the Simeto and Buttaceto rivers. The company announced that installation of the latter viaduct - an imposing metal structure 62m in length and 750 tonnes in weight - had been completed by a complex manoeuvre involving hydraulic pistons in February this year.

Webuild has also been involved in upgrades to the Fiumefreddo-Taormina and Taormina-Letojanni sections of the high-capacity line between Messina and Catania.