Project to remodel hub served by two of the busiest metro lines in North America. 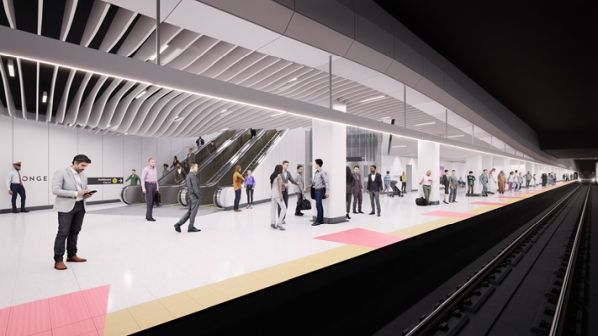 An artist's impression of how the new Bloor-Yonge station Line 2 platform may look when open.
Photo Credit: TTC

TORONTO Transit Commission (TTC) has awarded a contract to Aecom which will act as owner’s engineer on the Bloor-Yonge Capacity Improvements (BYCI) project to improve the busiest interchange station on the Toronto metro.

Aecom will provide consultancy services, including lean project delivery and building information modelling (BIM), through all phases of the project.

The total cost of the BYCI project, estimated at $C 1.5bn ($US 1.1bn), is to be met equally by the city of Toronto, the province of Ontario and the Canadian federal government.

Originally built in 1953 and located at the intersection of the two major streets which provide its name, Bloor-Yonge station is expected to see a significant growth in passenger numbers due to the increasing population of the Toronto area and new transport infrastructure.

This includes an 8km, five-station extension of Line 1 to Richmond Hill Centre, the opening of the Eglinton Crosstown LRT project, and the planned construction of the 15.6km, 15-station underground Ontario Line.

Even without these new developments, the platforms on lines 1 and 2 at Bloor-Yonge are already overcrowded during the morning and evening rush hours. In 2019 Line 1 had an average weekday ridership of more than 825,000 passengers, making it one of the busiest lines in North America.

“Bloor-Yonge station is a critical interchange - the busiest in Toronto’s subway system and one of the busiest in North America,” says chief executive of Aecom’s Canada region, Mr Marc Devlin.

“The BYCI project is a monumental next step in improving service levels and addressing ridership growth from within and outside the city of Toronto,” says Mr Sean Chiao, chief executive of the global Buildings and Places business at Aecom. “We look forward to serving as the TTC’s righthand advisor in this role to help them realise this exciting undertaking.”

For detailed data on metro projects in North America and around the world, subscribe to IRJ Pro.