THE London – Penzance main line has been badly damaged by a severe storm which washed away the track along the coastal section of railway at Dawlish west of Exeter. 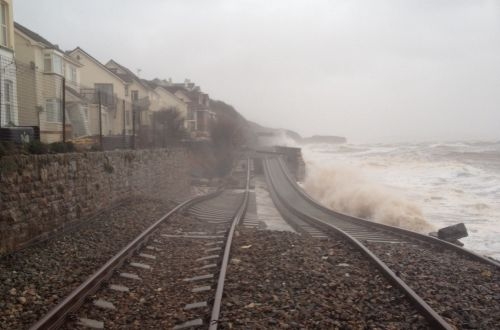 Network Rail says an 80m section of the seawall has been washed away together with the track bed, and as further storms are forecast later this week, additional damage is likely before work to repair the damage can start.

Mr Patrick Hallgate, a Network Rail engineer, says it could take up to six weeks to repair the sea defences and track. "This is probably the biggest structural engineering feat we've faced in the southwest for at least the last decade," he told the BBC.

Train services to the west of Exeter are currently suspended. This disruption is being exacerbated by the planned closure of the line between Exeter and Taunton from January 18 to February 9 for repairs to a tunnel.

The southwest main line has suffered from numerous incidents of flooding and landslides during the last couple of years due to the increased incidence of heavy rain, with the track between Exeter, Dawlish and Newton Abbot being the most susceptible as it is almost at sea level and follows the River Exe, the English Channel and the River Teign. The lack of an alternative railway means passengers are transported by bus when the line is closed.