ENGINEERS from Loughborough University have developed a failsafe and robust track switch mechanism called Repoint which they say will improve safety and reduce maintenance costs. 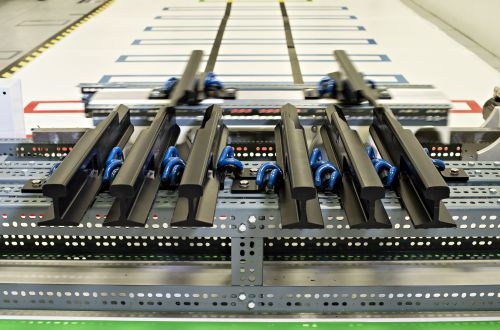 Repoint, which uses safety concepts derived from the aerospace and nuclear industries, consists of a patented arrangement of interlocking rail ends which incorporate a sliding arrangement similar to a breather switch. A lift and drop mechanism allows for expansion and provides an additional means of locking with virtually no friction losses.

"Repoint is a robust alternative to conventional switches that breaks with 200 years of tradition to offer a change in design that is inherently failsafe and fit for a 21st century rail network," says Professor Roger Dixon, head of the Control Systems Research Group.

"A standard switch takes around 4 seconds to move, during which time a train may have travelled 200m," Dixon explains. "Repoint's ability to reduce this time to under a second improves rail capacity without the need to build new infrastructure. It also has the potential to deliver huge cost savings, and will result in a significant increase in reliability and safety to the rail industry worldwide."

The next step is to build a prototype switch to be trialled either on a test track or a siding.

The project is supported by Britain's Rail Safety and Standards Board (RSSB). "We are currently seeking development partners from around the world to work with us to roll out the patented technology," says Dixon.