Detached fishplate cited as likely cause of French derailment

FRENCH National Railways (SNCF) says a detached switch fishplate is likely to be cause of the derailment of an inter-city train on July 12 at Brétigny-sur-Orge south of Paris in which six people died and 62 were injured. 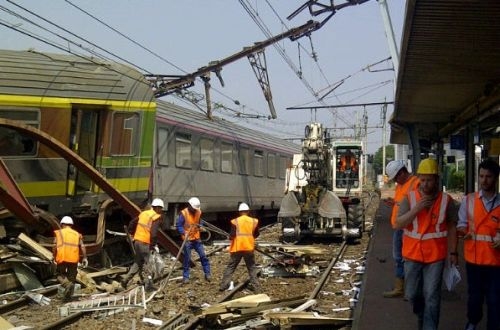 The derailment occurred as the 17.14 Paris Austerlitz – Limoges with 385 passengers on board approached Brétigny-sur-Orge at 137km/h, below the 150km/h limit for that section of track. The rear part of the train derailed, mounted the platform and came to rest on parallel tracks.

SNCF says the detached fishplate was discovered in a switch 200m north of the station. Damage to the rear wheelset (see photo) of the third coach of the train appears to confirm the hypothesis that the fishplate caused the rear part of the train to derail.

Examination of the locomotive and the derailed coaches did not find any mechanical abnormalities, and the coaches were last maintained on June 29. Similarly no mechanical defects were discovered on the two trains which passed through Brétigny-sur-Orge ahead of the derailed train.