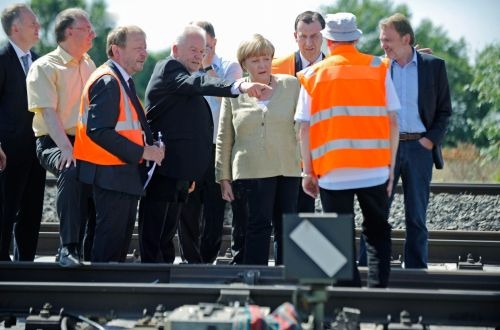 A 4km section of line between Rathenow and Stendal was damaged when the River Elbe flooded in June, and DB had not expected to reopen the line until mid-December. However, the damage to track and installations was not as serious as expected.

"The reports show that the flooding has caused no deep damage to the railway embankment on the high-speed line," explained Dr Volker Kefer, DB's board member for infrastructure and services. The water flowed slowly which caused only a few washouts and hollows beneath the slab track. Had the water flowed faster the damage would have been greater requiring more extensive renovation. Nevertheless signalling cables were damaged and are being replaced.

The repairs to the line are estimated to cost €150m while its closure forced DB to divert trains via Magdeburg or Wittenberge. This added around one hour to journey times which DB estimates will have cost it another €80m in lost revenue.