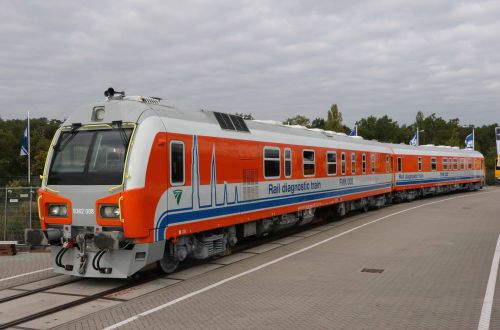 The two-car diesel-powered train was manufactured by MÁV at its Szolnok Works and is equipped with three measurement systems, all developed by MÁV Central Rail and Track Inspection. These include:

- ultrasonic measurement systems using water as the contact fluid, fed by a 10,000-litre onboard water tank, and

The measurement train is designed to operate for periods of up to two weeks and incorporates sleeping accommodation as well as catering facilities.

MÁV constructed the train using two former Ganz built series 00-40 postal carriages which have been completely rebuilt for their new role. One vehicle is fitted with two MTU diesel powerpacks with Voith hydraulic transmission, the other is an unpowered driving trailer.

The unit has a maximum operating speed of 120km/h, with a 70km/h maximum speed when measuring. MÁV expects the train to be used not only in Hungary but also in neighbouring countries such as Austria and Slovenia.

MÁV also announced at InnoTrans that it is planning to build regional DMUs at Szolnok for use in Hungary. The new two or three-car trains will comply with necessary TSI norms and unlike the measurement train will be entirely new. MÁV intends to use experience gained from the manufacture of the measurement train in developing its new DMU, which may be presented at InnoTrans in 2018.