SENER, Spain, has signed an ownership, protection and license distribution agreement with Spanish infrastructure manager Adif, the Polytechnic University of Madrid, and the Cidaut Foundation to promote the use of an innovate sleeper designed to tackle the problem of flying ballast on high-speed lines. 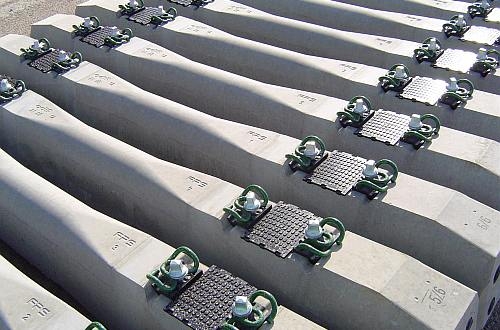 The Aerotraviesa sleeper has been developed as part of the Aurígdas Project, a research project led by Sener under the auspices of the Spanish National Plan for Environmental Research which has investigated the behaviour of ballast on lines operating at speeds greater than 300km/h. The project led to the development of a technical standard for evaluating the aerodynamic loads of different trains, which in turn was used to design the Aerotraviesa.

Under the agreement signed in Madrid on July 18, the four partners will be able to use the patent for the sleeper freely or to outsource the manufacturing and production of the sleepers for their own use. All of the parties are also free to promote and market the patent, and work together to optimise the use of the product. Sener says the Aerotraviesa has significant potential for licensing to sleeper manufacturers, and could be used on new high-speed lines, including the Haramain high-speed line between Mecca and Medina in Saudi Arabia.