INTEREST was high in Linsinger's MG31 milling machine at InnoTrans which was on display for the first time at the outside track area. 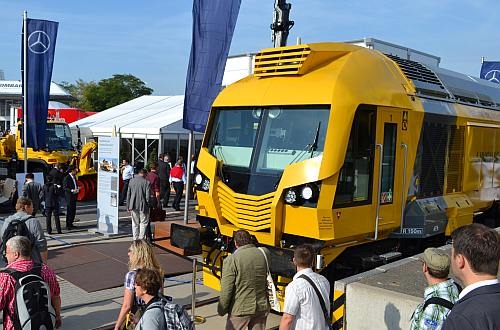 The machine consists of three milling units and one grinding and is suitable for high-speed and mainline rail milling and profiling. Linsinger says that the main advantage of the new machine is the central gangway which allows crew members to pass easily from one cab to the other during operations. The machine also has a 15m³ chip container, which is larger than the 8m³ container on previous milling machines, which should be sufficient for three shift operations.

The machine has a milling and grinding depth of 0.2mm - 5mm which makes it suitable for highly-worn track. It can operate at a rate of 20m per minute. Testing of the machine is due to commence next month in Austria and will be completed before the end of the year. Linsinger says that it is targeting markets in Germany for the machine while it sees India and Russia as two other attractive marketplaces.

• Linsinger and Russian Railways (RZD) signed off a deal confirmed in July in a ceremony held during InnoTrans and attended by RZD vice-president Mr Valentin Gapanovich for the supply of five SF06-FFSPlus rail-milling trains to Russia.

At 43m in length and weighing 156 tonnes, the SF06-FFS Plus is the largest rail milling train in Linsinger's range, and is the first that it has sold to Russia. It can reprofile conventional track, points and level crossings at up to 20m per minute, and includes two drivers cabs, integrated offices, and rest areas for a crew of four people.

Linsinger is cooperating with RZD subsidiary RPM Group, which is already delivering railway equipment worth Roubles 88bn ($US 2.84bn) in Russia, and general contractor Kaluga Plant Remputmash on the order. Delivery is scheduled for 2016.