SPANISH transport operator Madrid Metro West (MLO), in cooperation with Alstom, has carried out a project to digitise track inspections on the city’s Metro Ligero light rail network as part of a service agreement already in place between the two companies. 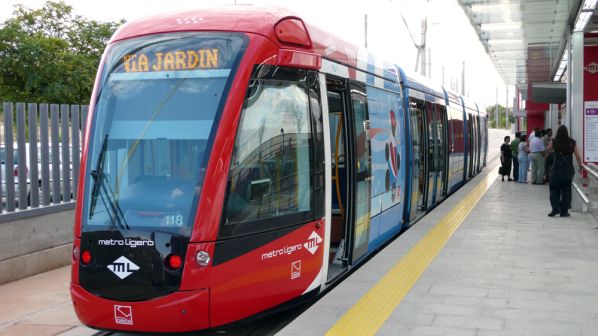 The project involved the inspection of 21km of track on the ML2 and ML3 lines using a special-purpose vehicle equipped with Alstom’s TrackTracer track inspection technology, which was carried out over the summer. The lines connect the western suburbs with suburban rail and metro links nearer the city centre.

The vehicle is capable of up to 4000 measurements per kilometre with a resolution of 0.02mm, at an average speed of 20km/h, and is equipped with four optical units, a camera, lasers and an inertial navigation system. The vehicle can also measure a range of parameters including rail width, levelling, track twist radius, alignment, banking and warping.

TrackTracer is a condition monitoring system produced by Alstom which employs predictive maintenance to monitor the condition of track. The system is designed to aid in the identification and repair of track anomalies which could cause derailment.

The data collected can then be accessed via Alstom’ HealthHub digital platform, which also incorporates other predictive maintenance tools including TrainScanner and CatenaryTracer.

The technology is intended to replace manual inspections, which are more conventional but slower, less reliable and more costly.

The project is the first commercial effort of its kind in Spain, and follows tests previously carried out in 2019 in collaboration with Barcelona Metro (TMB), as well as research and development projects carried out in cooperation with national infrastructure manager Adif.

Alstom was previously awarded a 15-year contract by Australia’s Metro Trains Sydney (MTS) to supply HealthHub predictive maintenance services for rolling stock and signalling on the 36km Sydney Metro Northwest Line, which opened in May 2019. An extension is planned for completion in 2024.