BRITISH infrastructure manager Network Rail (NR) successfully completed £100m of infrastructure upgrade work comprising 200 projects over the Christmas period, with a team of 24,000 accumulating 600,000 hours of work over the 10 days. 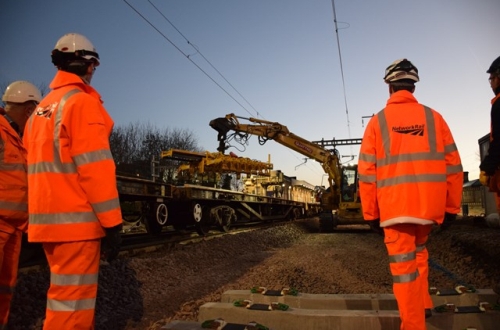 Among the highlights was preparatory work for the introduction of the new Crossrail route across London, which is due to open in 2018, while progress was also made on a new link between Manchester’s main stations, Victoria and Piccadilly.

Cambridge North station, which is expected to open in May, is now 80% complete following the completion of work, including the construction of new platforms, installation of track for a new bay platform and erection of overhead wires.

NR also completed crucial upgrades between Norwich and London so that a long-standing speed restriction on the lines between Shenfield, Essex and Seven Kings, London, could be lifted.

Engineers worked over a 10 day period to replace 12.5km of overheard wires at Gidea Park in Essex, installing more durable and heat-resist wires in place of a tangled web of crossovers. Trains have been delayed in recent years due to heat-related speed restrictions which will no longer be an issue.

As part of the Crossrail work improvements were also carried out near Brentwood and Shenfield in Essex to pave the way for the introduction of new, Aventra EMUs for Transport for London (TfL) Rail passengers from May. The improvements comprised:

• installing more than 1.5km of track

• alterations to the track and sidings at Shenfield station, and

• construction of a new platform at Shenfield station for future Crossrail services to use so that freight, fast and stopping passenger services can run without impeding each other.

In addition, over 4000 workers were deployed to upgrade existing lines in outer London, Berkshire and Essex in preparation for the delivery of the Crossrail project. These works comprised:

• opening the second ramp of the Stockley Flyover at Heathrow junction and a new dive-under at Acton. These new structures will be used by GWR, Heathrow Express trains and the Elizabeth Line (Crossrail)

• upgrading and remodelling the track at Maidenhead, and

• platform extensions at a number of locations including West Ealing, Southall and Hayes & Harlington.

Over £22m was invested to upgrade track, install new footbridges and replace railway bridges on the route from London Euston to Carlisle via the West Midlands and north west as part of NR’s Railway Upgrade Plan.
Upgrades completed included:

• track renewal and upgrades between London Euston and Watford Junction

• work in Manchester as part of the Ordsall Chord programme to link Manchester Victoria and Manchester Piccadilly, and

NR also completed a £4.5m section of the £800m Waterloo & South West upgrade over Christmas which is expected to boost capacity at London Waterloo Station by 30% by December 2018.