SCOTLAND’s Glasgow - Falkirk - Edinburgh main line has been reopened following heavy damage to around 300m of track due to the breaching of the adjacent Union Canal on August 12. 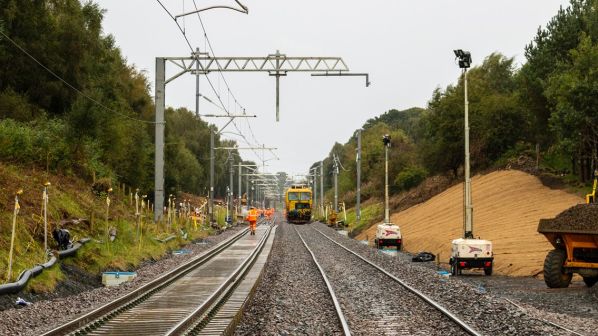 The line was closed following the flooding, which occurred near Polmont, 5km east of Falkirk. Initial assessments by infrastructure manager Network Rail (NR) found that sections of track had been washed away, embankments undermined, and overhead electrification masts had been uprooted.

Additionally, uprooted trees were strewn across the line, and more than a kilometre of track and ballast was contaminated.

During the past six weeks, NR has rebuilt the line’s foundation, including replacing over 15,000 tonnes of soil and track ballast. A kilometre of new double-track line has also been laid, alongside the installation of 3000m of new signalling cables and two overhead twin track power gantries.

The reinstatement of the line has been completed ahead of schedule, with initial assessments suggesting that it could take up to two months to restart services.

“The scale of the challenge faced by those repairing the damage to this vital route was huge, and that they have delivered this so promptly is testament to the hard work and dedication of staff across Scotland’s Railway,” says Mr Michael Matheson, cabinet secretary for transport, infrastructure and connectivity for the Scottish government.

“It is clear that severe weather events will continue to have an impact on our transport networks in future years to come and that is why we are taking steps to add further resilience by making climate change mitigation a central theme of our National Transport Strategy.”

“The unprecedented rainfall near Polmont last month had a severe impact on our ability to run services between Glasgow and Edinburgh, and we thank customers for their patience while repairs were carried out,” says Mr Alex White, ScotRail COO.