IRJ at InnoTrans 2018: Network Rail (NR) has granted British Steel a two-year extension to its five-year supply contract, which was due to finish in March next year. 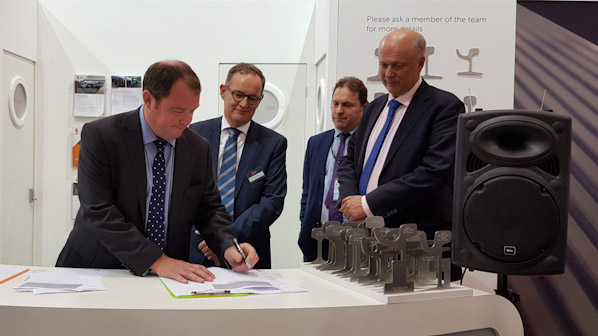 “During the course of the last five years we’ve worked extremely closely with Network Rail, ensuring the on-time delivery of half-a-million tonnes of high quality rails in lengths of up to 216m,” says British Steel’s chief marketing officer, Mr Ron Deelen. “Together we’ve helped find solutions to the challenges they face, enabling us to develop and install new products which reduce the need for costly and time-consuming maintenance and replacement works.”

“We are proud to extend our historic relationship with British Steel for a further two years,” says NR route services supply chain operations director, Mr Rob Morton. “This new deal is an example of how we continually review our sourcing options to provide the safest network and maximise value for money for the British taxpayer.”

British Secretary of State for Transport, Mr Chris Grayling, witnessed the signing and said it was a pleasure to see the cooperation between the two British companies.

He also took the opportunity to discuss Brexit, and said he saw it as an opportunity.

“This show has businesses from all over the globe, working with each other, selling to each other, and forging partnerships with each other, and that I think is our vision for British companies post Brexit,” Grayling says. “We’ll be back here in two years time as the UK team, supporting UK companies, and you’ll carry on going on from strength to strength around the world.