BRITAIN’s infrastructure manager Network Rail (NR) has introduced into operation the first two of three 150m-long grinding trains, which Loram and Colas Rail are supplying under a £36m contract. 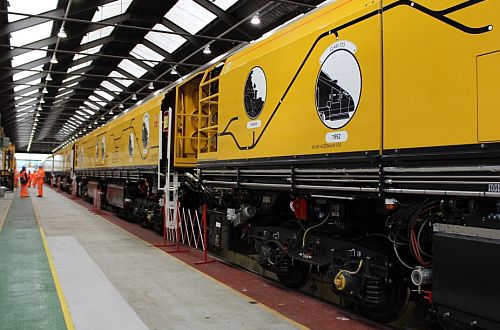 One of Network Rail's new grinding trains supplied by Loram and Colas Rail.

The trains will replace several older grinding machines that are coming to the end of their life. The new grinding trains can remove metal from the rail head at up to 25km/h and can travel between work sites at speeds of up to 110km/h.

“The new models cost £1000 less per shift to operate, deliver 35% more output, have increased reliability, better welfare facilities for the teams working on them, and are expected to last for the next 30 years,” NR says.

The grinding trains are modular, allowing them to be coupled together. The modular design also means parts and components can be replaced quickly, which should reduce down time. They are designed for improved working within third-rail electrification areas, and have an obstacle detection system. The new grinding trains have larger water tanks than those they are replacing to dowse smouldering fires, and have welfare facilities on board to provide a comfortable working environment for staff.

The first two machines are already out on track and the third and largest grinding train will enter service during the Christmas period, after it completes dynamic testing.