RAILWAY Infrastructure Serbia (IZS) will invest Dinars 1.9bn ($US 20m) in line upgrades in 2018 in order to reduce the total sections where speed restrictions are in place to less than 50km. 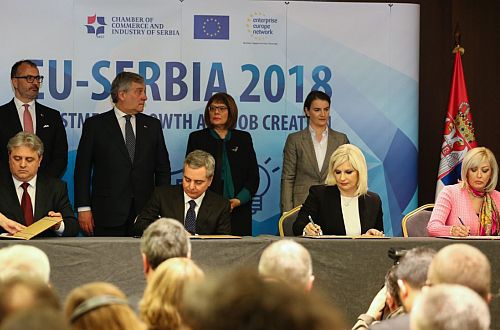 According to general manager Mr Miroljub Jevtić, IZS has already reduced the number of lines impacted by speed restrictions by 40% from 296km to 179km, and around 10km of track is being upgraded daily.

In addition, work is underway on the 113km Pančevo - Orlovat - Novi Sad line to enable the reintroduction from September 1 of regular passenger services between Novi Sad and Zrenjanin using new Russian diesel trains purchased through a loan from Russia. The work will also enable freight trains to use the line instead of the Kalemegdan bypass in Belgrade from June 30.

Jevtić says that tenders have been invited for the overhaul of two sections of the Ruma - Šabac - Donja Brasina - Bosnian border line comprising the 12km Petlovac - Lesnica and the 11.3km Loznica - Gornja Koviljača sections. Tendering has also started to upgrade a 3.5km section of the Belgrade - Niš - Preševo main line.

Speaking at the EUMedRail conference, which was staged in Belgrade on February 6-7, Serbia’s minister for construction, transport and infrastructure, Ms Zorana Mihajlović, said that by the end of 2019 Serbia will have 450km of reconstructed tracks, with an average speed of 110km/h.

In January, Serbia signed a €134m loan agreement with the European Investment Bank (EIB) for the modernisation and electrification of the 100km Niš - Dimitrovrad line in southeast Serbia. The European Union will provide an additional €73 million for the €260m project.