VOSSLOH has completed an audit of the track on the 13km light rail network in Le Havre, France, operated by Porte Océane Transport (CTPO), a subsidiary Transdev, to determine its current condition and future maintenance needs. 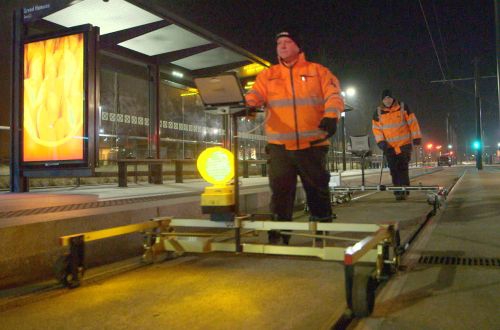 Up to 22 LRVs operate daily on the standard-gauge, double-track network which comprises two lines with 23 stops. During the peak period, LRVs operate at three-minute headways.

The audit was conducted between February 9 and February 22. Different measuring procedures and techniques were used to create an overall picture of the current condition of rails and track, and the data was evaluated using high-performance software developed by Vossloh.

“To be able to inspect all of the 52km of rail during the short night shifts and digitally record the rail defects or parameter deviations, we had to plan the simultaneous deployments of the teams as precisely as possible,” says Mr Emmanuel Ettighoffer, Vossloh’s project manager. “It therefore proved helpful that all the profile measuring devices and material testing equipment are manually guided and can be on-railed and off-railed quickly.”

“On a day-to-day basis, the network’s quality is assured by our own maintenance technicians, but after five years of operation, and in order to obtain a precise and global analysis of the rails’ condition, we decided to work with Vossloh,” says Mr Eric Lang, CTPO’s contracts and technical project manager. “The analysis will allow us to implement an individual and efficient maintenance strategy.”

The results confirmed the assessment by CTPO that the track is in good condition. “In addition to the feedback provided, we were also able to draw useful conclusions from the analysis about the wear behaviour of our rails,” Lang says. CTPO wants to apply data to optimise the maintenance cycle and to make more targeted use of the maintenance budget.