IRJ at IAF: Two high-speed rail grinding trains are being developed for China by a joint venture of Vossloh and China Railway Construction Corporation subsidiary CRCCE. 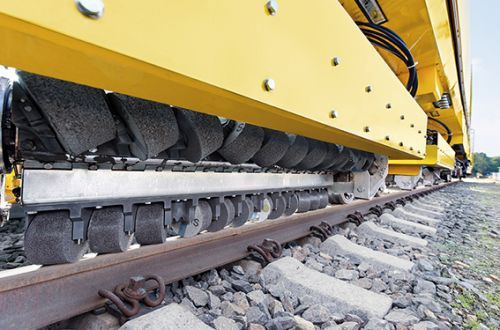 The first, which is already under construction, is a self-propelled high-speed grinding (HSGS) train for which Vossloh is supplying the grinding heads, control software, electrics, and hydraulics. Vossloh will ship the equipment to China in August or September. Installation will take around three months, followed by commissioning and testing.

The second machine is a metro version of Vossloh’s high-speed grinding machine. For this train, CRRCE will provide the two power cars, while Vossloh will build and equip the three intermediate vehicles. The HSG Metro train has Y-shaped grinding units, its own power supply and dust capture equipment for operating on underground lines.

This train is destined for Beijing metro although a contract has not yet been signed. The train should be ready for operation in the second half of 2018.