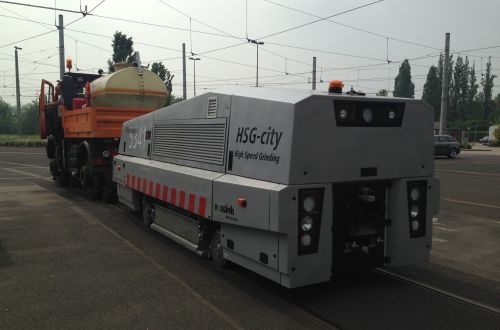 HSG City is an adaptation of VRS' High Speed Grinding main line service, which has been bought by infrastructure managers in Europe as well as China where the machine is used on the Beijing - Shanghai high-speed line. Rheinbahn is HSG City's first customer, signing a contract in April 2013. The machine was delivered to Düsseldorf in March and is currently undergoing homologation.

Like the main line version (IRJ December 2011 p33), HSG City utilises Vossloh's HSG technology which is based on the principle of circumferential grinding using specially-shaped stones which, unlike conventional grinding, are free to rotate during the grinding process on straight track sections. However, several adaptations have been made to suit urban operations.

For example instead of four interchangeable units of 12 grinding stones, the machine uses one single 12-stone set. The machine is designed to remove up to 0.01mm for each pass, taking 10 passes to remove the optimal rail amount of 0.1mm which is deemed appropriate. It has also been designed with sufficient clearance to accommodate a third rail as well as the restrictive loading gauges associated with some urban transport networks. Indeed Vossloh says the machine would be able to operate in London's underground network and is able to lift and adjust the position of the stone unit to avoid potential clearance issues. The machine uses a vacuum system to significantly reduce the quantity of dust remaining after a pass with four boxes each able to hold 10-20kg, while safety has been improved through the addition of a water pump system. In dry conditions water is sprayed to about 1.5m behind the grinding machine during operations in order to minimise the potential for sparks to cause a hazard.

Rheinbahn is homologating its HSG City machine to operate at 30km/h and it is pulled using a Zweiweg Unimog track vehicle. And while this compares favourably with conventional grinding, which often only takes place at 2-5km/h, Vossloh says HSG City could be operated at up to 60km/h. It is also possible to couple the machine, which is bidirectional, to a conventional light rail or metro vehicle.

Vossloh says that the homologation process in Düsseldorf is helping it to tweak the HSG City systems in order to improve its performance. The company is currently developing a second machine, which it expects to exhibit at InnoTrans in September, and intends to offer as part of a mobile maintenance service, like the original HSG main line concept, later this year.

While HSG is primarily a preventative grinding system to reduce signs of rolling contact fatigue as well as for rail cleaning, it is also effective at reducing track noise, which is the major priority for Rheinbahn.

In addition to highlighting its adoption of HSG technology, Rheinbahn was keen to use the event to emphasise other work that it is undertaking to reduce noise emissions and vibrations from its network, inviting members of the public to attend to take a closer look. These include the installation of grass-filled track structures, which it has done for the last 25 years, and more recent techniques like trackside and wheel lubrication systems, track and wheel dampeners and the installation of new wheel profile measuring equipment.

The transport operator also hosted a panel session during the event in which local politicians, the company's top management, and academics commented on the issue of noise in the city.

Mr Dirk Biesenbach, Rheinbahn CEO, participated in the discussion. He told IRJ that the addition of HSG to its maintenance portfolio is an attempt to appease local residents who have become frustrated at a perceived increase in noise and vibrations since it upgraded its rolling stock fleet. Many people have taken to social media to vent their frustration, which has increased pressure on the operator to act, and he is hopeful now that the city has a portfolio of solutions which will minimise this problem in the future.

"Noise emissions from the railway are a huge problem in this city and it is up to us to identify solutions to these problems for our neighbours," Biesenbach says. "German Rail (DB) already uses the larger system so we decided to test it to see if it suits our needs. The tests went OK so we decided to buy it."