Vossloh’s HSG-city approved for use on German main lines

THE German Railway Authority (EBA) has approved Vossloh’s HSG-city as a heavy ancillary vehicle capable of speeds of up to 60km/h, enabling the track grinding machine to operate on main line and suburban rail infrastructure. 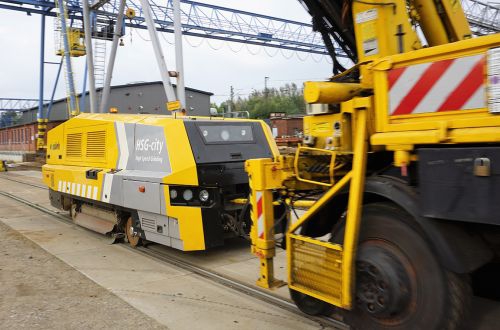 HSG City utilises Vossloh's HSG technology which is based on the principle of circumferential grinding using specially-shaped stones which, unlike conventional grinding, are free to rotate during the grinding process on straight track sections.

Vossloh says the targeted use of the HSG-city is a more economical option than using conventional larger vehicles used on main line tracks.

“This latest approval allows us to increase its use, particularly in rapid transit interurban networks,” says Mr Marcel Taubert, Vossloh Rail Service’s managing director. “Considering our ambition to acquire new European customers for this preventative grinding technology, we view the EBA approval as a mark of quality that will attract international attention.”

The next step for Vossloh is to secure approval for HSG-city to maintain “specially-monitored” track with qualification tests taking place up to the end of the year as part of the Federal Ministry of Transport and Digital Infrastructure’s I-Lena noise emissions reduction project.