ETIHAD Rail has awarded a joint-venture between China Railway Construction Corporation (CRCC) and National Projects and Construction (NPC) a Dirhams 4.6bn ($US 1.2bn) contract to build a 145km line connecting Fujairah and Khorfakkan with Dubai and Sharjah. 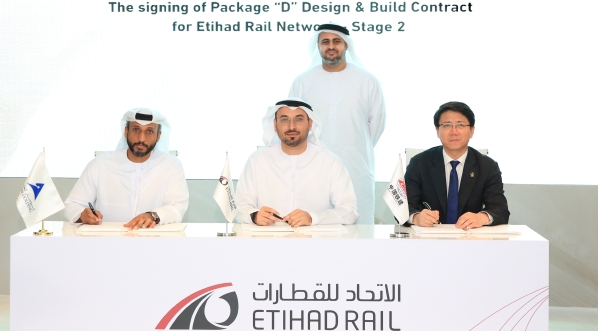 The 145km line includes the construction of 15 tunnels through the Hajar Mountains with a total length of 16km, along with the construction of 35 bridges and 32 underpasses. This will be the first main line railways in the northwest of the United Arab Emirates (UAE).

Etihad Rail says the contract linking the ports of Fujairah and Khorfakkan to the railway network, which is part of the UAE’s Stage Two project, will allow the movement of up to two million TEU’s (twenty-foot equivalent container units) per year. Etihad Rail will also carry up to 30 million tonnes of construction material annually to distribution centres in Abu Dhabi and Dubai, cutting transport costs and reducing truck journeys by more than 2000 per day.

This comes as part of the company’s plans to establish a 1200km national railway network, which will form an integral part of the Gulf Cooperation Council (GCC) Railway.

Etihad Rail has completed Stage One of the project, which spans 264km line from Shah and Habshan to Ruwais. Stage Two connects the UAE and Saudi Arabia from Fujairah Port to Ghuweifat via Mussafah, Khalifa Port and Jebel Ali Port.