TMH passenger coach for Egypt heads to Hungary for tests

THE first prototype Transmashholding third-class coach for Egypt has left the Tver Carriage Works plant in Russia bound for Hungary where certification tests will take place. 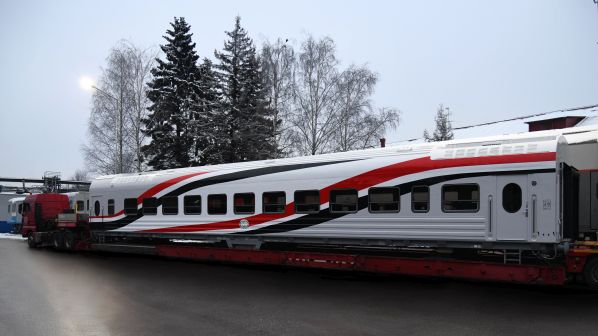 These procedures will include tests of wheel load and carbody weight, carbody and bogie rotation, inside and outside noise level, braking systems and dynamic behaviour on the standard-gauge Hungarian network.

The coach has already completed factory static tests, which were performed by the Tver Manufacturing Institute in collaboration with Hungary’s KTI Research Institute. Tests included strength tests for bogie frames and the carbody, tests of electrical equipment, ventilation systems, toilets and water supply.

Following the completion of the Hungarian tests, the coach will continue its journey to Egypt where endurance tests will take place. TMH will deliver the first batch of 30 coaches by the end of the first quarter of 2020.

Technical specifications were approved in July allowing two prototypes to be manufactured for testing and certification.

The third-class coaches have 88 seats, two toilets, LED lights and forced-air ventilation. The coaches are mounted on cradleless bogies and have two-stage leaf-spring suspension.