THE GOVERNMENTS of Botswana and Namibia have signed an agreement to build the Trans-Kalahari Railway (TKR), a 1500km heavy-haul line linking Botswana's coalfields with the existing railhead at Gobabis in Namibia. 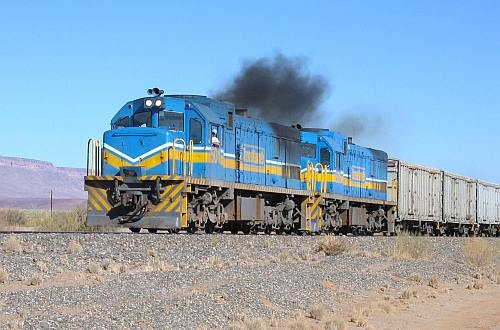 As well as the new line from Botswana, the TKR project will involve complete rehabilitation of the TransNamib line from Gobabis, via the capital Windhoek, to serve the new port at Walvis Bay. Construction costs for the TKR are estimated at $N 100bn ($US 9.2bn), and financing will be sought from the private sector.

The agreement was signed by Mr Tom Alweendo, director general of Namibia's National Planning Commission and Botswana's minister of minerals, energy and water Mr Onkokame Kitso Mokaila. The ceremony took place at Bird Island near Walvis Bay, the location where Namibia Ports Authority intends to construct the new North Port Bulk Container Terminal, which will be fed by the TKR.

Mr Charles Siwawa, chief executive officer of the Botswana Chamber of Mines, said that Chinese and Indian demand for the more than 200 billion tonnes of coal in Botswana's central Karoo basin could boost his country's economic growth prospects.

The railway will also expand freight capacity on congested transport corridors within the Southern African Development Community (SADC) and is also expected to provide greater access to global markets for other landlocked countries in the region like Malawi, Zambia and Zimbabwe.