CONSTRUCTION of the 375km Awash - Weldia railway in Ethiopia achieved a major milestone during the weekend of August 7-8 with the holing through of a 1530m-long tunnel, just over one year after tunnelling started. 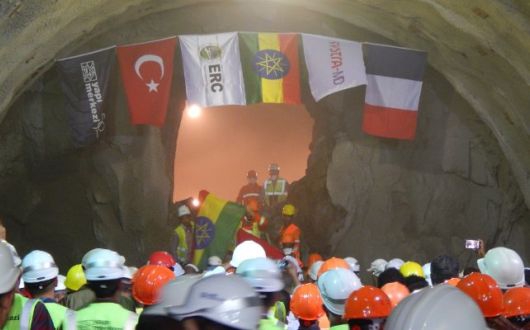 The tunnel is the longest on the new line. All six tunnels on the line were due to be have been holed through in August, and three of them have now been lined and are ready for track laying to start.

The line is being constructed by a consortium led by Yapi Merkezi, Turkey. The terrain is particularly challenging for railway construction as Awash, at the southern end of the line, is 986m above sea level, and the line then climbs to Kombolcha at 1842m and finally reaches Hara Gebeya, close to Weldiya, at 2122m above sea level.

The line will connect at Awash with the east-west main line linking Djibouti with Addis Ababa.