EGYPT’s National Authority for Tunnels (NAT), a division of the ministry of transport, has selected Hyundai Rotem to supply 256 metro cars for the phase three extension of Cairo metro Line 3, which is currently under construction. The contract is worth Won 433bn ($US 377.5m) which Hyundai Rotem says is its largest ever order in Africa. 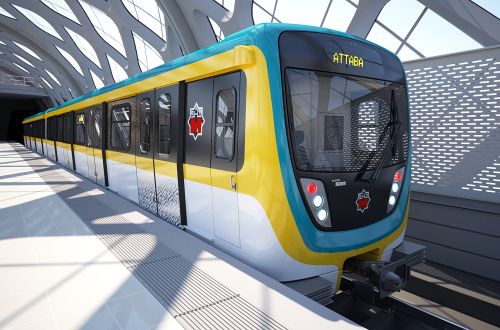 The contract also includes maintenance of the vehicles for eight years and Hyundai Rotem says it will collaborate with local partners in order to begin delivery of the trains in 2018 for completion by 2020. It adds that the trains will include components that are resilient in temperatures of up to 50°C, which are common during the Egyptian summer.

Hyundai Rotem says its previous successful delivery of 20 nine-car trains for Line 1, as well as backing from the Korean government, enabled it to secure the order. Financing is supported through a Foreign Economic Cooperation Fund EDCF) agreement as well as export financing provided by Korea’s Ministry of Strategy and Finance and the Export-Import Bank of Korea.

Phase 3 involves extending Line 3 by 17.7km from Attaba west to Kit Kat Square where the line will split. The northern branch will run via Embaba to Rod El-Farag, while the southern section will serve Cairo University. The extension will add 15 stations to the network and will increase traffic on Line 3 to more than 1.5 million passengers a year when it opens in 2022.

A consortium including Alstom and Thales is providing signalling, telecommunications and electromechanical equipment for the project under a €187m contract awarded in November 2015.

For more on the world’s latest fleet orders, subscribe to IRJ Pro