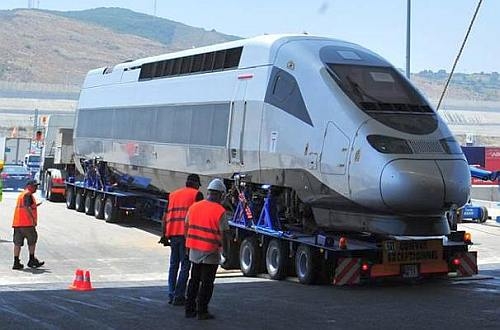 Speaking at the UIC High-Speed Rail World Congress in Tokyo on July 8, ONCF's director of development Mr Mohammed Smouni said that the 183km Tangiers - Kenitra line has been delayed due to difficulties in completing land acquisition, while costs for the €1.8bn project have risen 10-15% above the original budget.

The cost per kilometre is €8.5m excluding the four new stations and the fleet of 14 200m-long double-deck TGVs.

The overall project is now estimated to be 70% complete. Civil engineering is 80% complete and work on equipping the line is scheduled to start in December. The maintenance depot is 88% complete, and will have 14 tracks totalling 10km with capacity for 30 trains.

Alstom has delivered the first two pre-production trains which are now being tested. Assembly of the remaining 12 trains is underway and is now 62% complete. The trains are equipped to operate on both the 25kV ac electrification used on the high-speed line and Morocco's conventional 3kV dc system to enable through operation over the existing line to Rabat and Casablanca. The maximum operating speed on the new line will be 320km/h.

Official acceptance of the high-speed line is scheduled for December 2016. This will be followed by final commissioning allowing the line to open in March or April 2018. A Tangiers - Casablanca journey time of 2h 10min is envisaged, compared with 4h 45min today.