Prasa Afro 4000 locomotives to be auctioned off

WH Auctioneers, South Africa, has launched an online auction for the sale of 13 Vossloh Afro 4000 locomotives built in 2014-2015 for Passenger Rail Agency of South Africa (Prasa). 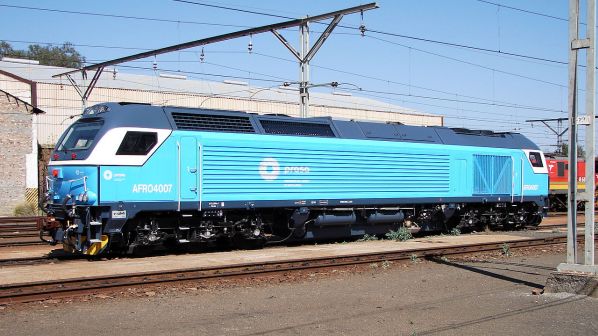 Twenty of the six-axle diesel-electric locomotives, which are a 1067mm-gauge development of the Vossloh Spain (now Stadler Rail Valencia) Euro 4000, were ordered in 2013 by Swifambo Rail Leasing, a Black Economic Empowerment rolling stock leasing company, in a deal which also included 50 AfroDual electro-diesels.

In 2014, clearance tests found that the Afro 4000 would exceed South Africa’s structural loading gauge with a minimum roof clearance of just 10mm below the contact wire. However, the first locomotive was delivered in November 2014 and trials began soon afterward.

In November 2015 Prasa went to the High Court in Johannesburg in a bid to annul the contract on the grounds of collusion during the tendering process. In July 2017 the court ruled that Prasa had awarded the contract to Swifambo through a “corrupt tender process.” An appeal against the ruling was rejected by the Supreme Court of Appeal at the end of last year and Swifambo went into liquidation soon afterwards.

Only 13 Afro 4000 locomotives were delivered to South Africa and one of the locomotives in the auction was badly damaged in a derailment at Modderrivier near Kimberley in August 2015.

The deadline for bids in September 12.